Improving and Serving the Music

Young French cellist Bruno Philippe has already performed with some of Europe’s most prestigious orchestras, including the Frankfurt Radio Symphony, Bavarian Radio Symphony, and the Chamber Orchestra of Paris. The 29-year-old is a prize-winner of competitions including the André Navarra, Tchaikovsky, and ARD, and has released several solo albums to great acclaim.

Bruno talks to me from the south of France, where he is recording works for cello and piano by Poulenc and Franck. We talk about how singing inspires his playing, and his changing relationship with Bach. 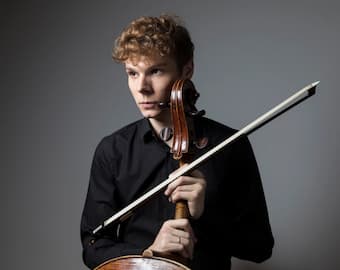 My parents were not musicians, but I have a sister, two years older than me, and when I was 3 she asked my parents to begin the violin. I had to wait in the conservatoire during my sister’s half-hour lesson, right in front of the door. I remember the cello class was next door to the violin class, and I wanted to imitate my sister but didn’t want to do exactly the same, so I knocked on the door and asked if I could play the cello. I was a bit too small so I had to wait one more year – then I began!

I don’t remember any moment I properly chose to do it as a job, although when I left my home to study in Paris (I was born in the south of France), I was 13 and I think in a way I realised that it was the beginning of something serious because it was quite hard to leave my home.

Of course, there were moments where I thought I could or should stop, but I never asked myself if I should do something else. For me, it has always been part of a way to be happy. It sounds a bit cheesy but it has always been a way to feel good, to play the cello, so even during my teenage years I never had a moment where I struggled and thought I should be a banker or something else.

So many people. I get inspired by a lot of people, from friends and family, but on the musical side, since my childhood, I’ve been a huge fan of singers, especially singers of Lied.

I’m not a huge connoisseur of opera but I fell in love with Lied in my childhood and I think [Dietrich] Fischer-Diskau was one of the best inspirations to play the cello as his singing is speaking, the way he uses his voice to shape what he sings, it helps us so much when dealing with our bow as string players.

I think it’s important in our job to admire people, even people with whom you play. It gives you the wish to play the best of yourself, to play with people you admire. And when there are people you admire on the human side also, then it’s a complete dream.

Since my childhood my favourite composer is still Schubert, definitely, because of his simplicity, and the way he’s able to be here to celebrate happy moments and to heal you while you are depressed or upset by something. He’s a lovely companion to be close to. 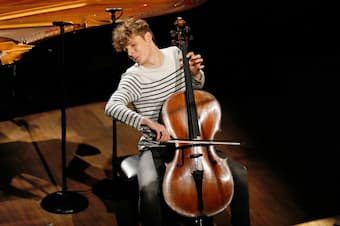 There are many things in the Baroque era I want to do, music by C.P.E. Bach, and with concerti, I dream of playing Don Quixote by Strauss or Schelomo by Bloch. In the next maybe five or ten years I would love to have the opportunity to play these pieces.

I feel lucky being a cellist. If I was a pianist or violinist, there is so much repertoire that I would feel lost wanting to play everything. With the cello, what’s great is that we have maybe ten major concerti, and during our lifetime we can cover most of the repertoire.

The last few years I haven’t felt so comfortable playing Bach, but it’s the thing I want to try to improve the most, to serve the music.

Maybe three or four years ago I would have said no, or said something normal like reading books or watching movies, but today I get more and more inspiration from my family life. My children are very young, and at this very young age you need a lot of patience, in a way, to raise them, and to raise yourself, and this helps so much with music.