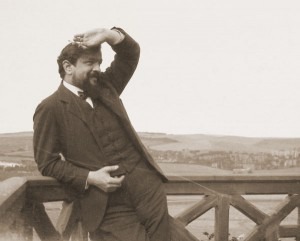 Demoralized by the carnage of World War I and fighting his own battle against cancer, Claude Debussy (1862-1918) writes, “Try as I may, I can’t regard the sadness of my existence with caustic detachment. Sometimes my days are dark, dull, and soundless like those of a hero from Edgar Allan Poe; and my soul is as romantic as a Chopin Ballade.” Cruelly faced with his own mortality, Debussy went to work on a series of instrumental sonatas. In a letter to the conductor Bernardo Molinari from 6 October 1915 he writes, “I spend nearly a year unable to write music…after that I’ve almost had to re-learn it. It was like a rediscovery and it seemed to me more beautiful than ever! The emotional satisfaction one gets from music can’t be equaled, can it, in any of the other arts? This power of the right chord in the right place that strikes you…we are still in the age of harmonic progressions, and people who are happy just with beauty of sound are hard to find.” Debussy had intended to compose a total of six instrumental sonatas for various instruments, yet at the time of his death only three were complete—one for flute, viola and harp, one for violin and piano, and one for cello and piano.

Claude Debussy: Sonata for Cello and Piano in D minor
Debussy saw these compositions as an affirmation of French culture. “I want to work not so much for myself, but to give proof, however small it may be, that not even 30 million ‘boches’ can destroy French thought.” This quest to promote the musical heritage of French music prompted Debussy to look back to the emotional reserve and textural clarity of the music of the French Baroque. At the turn of the 20th-century, Debussy already had edited the complete works of Rameau for publication. However, it still came as a major surprise that the Cello Sonata, while utilizing a rich palette of timbres and achieving exquisite subtlety in both the piano and the cello, structurally relied on sonata form. Although highly ambivalent towards such acknowledged masters as Beethoven and Brahms, Debussy nevertheless wrote in a letter to his publisher, Jacques Durand, that he regarded highly the “proportions and almost classical form in the best sense of the word” in his freshly composed cello sonata. Clarity of structure none withstanding, the sonata for cello and piano is one of Debussy’s most forward-looking and most aggressively experimental works. The rhythmic language is full of surprising interjections, short bursts of accented notes, and sudden changes of tempo. And the harmonic language veers far enough from tonality to escape it altogether for long stretches. Special effects in the cello writing—harsh pizzicato, glassy ponticello passages in measured tremolo and floating flautandi high up the fingerboard—forcefully pronounce a composition of startling modernist originality.

The “Prologue,” initiated by an introductory fanfare in the piano, relies on a specific melodic-rhythmic figuration that originates in the music of the French Baroque. Subsequently, the cello introduces a theme that takes its character from a Baroque operatic lament, and in due course introduces a theme that alternates between the minor and major tonalities. In a grand musical arch, the fanfare and lamenting themes are repeated, with the fanfare providing the fitting conclusion. Originally, the title of this composition was to make reference to Albert Giraud’s poem “Pierrot Lunaire.” This puppet character from the commedia dell’arte, which was musically immortalized in Arnold Schoenberg’s expressionist setting, dominates Debussy’s “Sérénade” movement. Imitating the strained sounds of a singing puppet—accompanied by the stylized strumming of a guitar—this movement leads into a “Finale” that offers an inexhaustible array of instrumental effects.

The Sonata will be performed byAurélien Pascal (Cello) and Pierre-Yves Hodique (Piano) at the Beethovenfest Bonn on 6 September 2015.