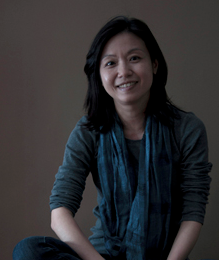 She went on to do a doctorate in musicology on the California composer Lou Harrison, known aesthetically for his internationally informed music that incorporated music from non-Western cultures, looking at social criticism in his post-WWII works and the question of interpretation.

We discussed some of her recent works, including Lineae, a work for string quartet and dancers. In working with the choreographer, Francis Leung, Joyce said that they were in conversation all through the composition process.

She learned, that for the dancers, setting the mood was important and that the kind of music that choreographers tend to choose isn’t very active – so she purposely wrote music that doesn’t have many big statements but had a distinctive flow that the dancers could respond to. 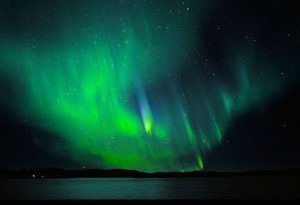 In 2010, as part of a large project setting the silent films of Charlie Chaplin to contemporary music, she wrote Behind The Screen (屏幕之後). When I attended the performance in 2010, it was apparent that, of the many composers involved in the project, she was the only to actually understand the role of music and film. Where many of the composers wrote reactions to what was happening on screen, Joyce helped the audience see the humor by setting up the situations musically that the comedy then delivered. When we talked about her work on the project, she said that one of the hardest parts about starting was getting a definitive version of the film, since there were so many different versions in circulation.

We don’t have a copy of her musical setting to this film, but the silent film itself is readily available.

The work was written for string quartet and given its the premiere by the Hong Kong New Music Ensemble. When we talked about the possibility of issuing the work as a pure string quartet, without the film, Joyce indicated that some rewriting would be necessary as it was still so tied to the visual.

Joyce has had two recent commissions from the Hong Kong Sinfonietta, Quicksilver Swirls (2006) and Clear Light (2015). Quicksilver Swirls (水銀漩) came from looking at an aquarium and how the fish moved in water: darting, turning, and changing in color in the light. The element mercury (quicksilver) brought its silvery color and fast motion. In translating this for orchestra, repeated notes, turning melodic lines and quick motion capture the spark and flash of her visual inspiration.

Tang: Quicksilver Swirls (Brno Philharmonic Orchestra; Mikel Toms, cond.)
Clear Light (明光), performed at the Hong Kong Arts Festival, will be taken on tour by the Hong Kong Sinfonietta and will receive its European première in Switzerland in October.

Her work is very much in the modern tradition – for her work Aurora, for chamber ensemble, she takes the idea of the aurora borealis, the swirling streams of light seen at the North and South Poles and uses the image of curtains of light. The clarinet and flute are the melodic instruments, with extended expressive lines, the piano is the percussion instrument. The timbre of the various instruments is layered and varied, just as the lights themselves fold and pulse.

Tang: Aurora (Hong Kong New Music Ensemble; John Winzenburg, cond.)
For some aurora video, see this, but turn your sound off on YouTube and play Joyce’s music behind the video and you’ll see how well it fits.