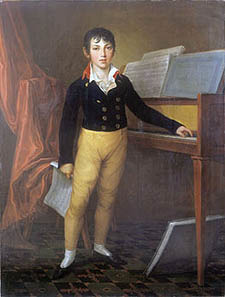 The composer Jacob Liebmann Beer (1791-1864), frequently described as the most successful stage composer of the 19th century, is more commonly known under his stage moniker Giacomo Meyerbeer. That name arguably represents the best combination of his parents’ names, Jakob Herz Beer and Amalia Liebmann Meyer Wulff. Born into a wealthy Jewish merchant family in Berlin, young Giacomo first appeared publically as a piano virtuoso at age 11. Composition lessons with the highly esteemed Friedrich Zelter quickly followed, but his first attempts failed to make an impression. By 1810, Meyerbeer was sent to study with the famous Abbé Georg Vogler in Darmstadt, and found himself in the same composition class with Carl Maria von Weber. Towards the end of his study with Vogler, Meyerbeer’s second opera Alimelek, oder Wirth und Gast (Host and Guest) was first performed in Stuttgart in 1813. Although Meyerbeer would revise this fantasy from the fairy-tale world of Thousand and one Nights several times, performances were unsuccessful. 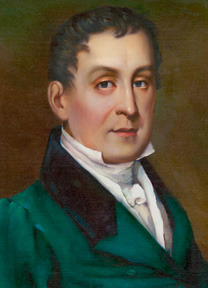 Once his studies with Vogler were complete, Meyerbeer embarked on an independent career and traveled to Munich. During his Munich tenure, which lasted almost an entire year, he met the world-renowned clarinetist Heinrich Baermann. Born in Potsdam, Baermann established a highly successful career as a traveling virtuoso, entertaining audiences throughout Europe and Russia. He was widely considered the “Rubini of the clarinet” because he rivaled the great Italian tenor in richness, beauty, and phenomenal compass. Baermann’s expressive and luxurious playing had already inspired Carl Maria von Weber to craft no fewer than five large-scale works for the clarinet virtuoso. And in 1812, Felix Mendelssohn — in competition with Meyerbeer — wrote two Konzertstücke for Baerman. Not wanting to be left behind, Meyerbeer quickly composed a number of works for the clarinet in 1813 as well.
Meyerbeer: Clarinet Quintet in E flat Major

During his early career, Meyerbeer was predominantly known as a piano virtuoso. He also composed a number of piano works that were never published and have since disappeared. As he wrote to a friend, “They are not worth mentioning, but my playing is an entirely different matter.” The famed Ignaz Moscheles found his playing “unsurpassed,” and the virtuoso J. B. Gänsbacher wrote that he “had never heard the like.” Intrigued by the growing fame of the “London Pianoforte School,” Meyerbeer traveled to London to hear performances by Johann Baptist Cramer. Already Beethoven had considered Cramer a most outstanding performer, “all the rest count nothing.” He was particularly known for his smoothness and speed, and contemporary reviews frequently referred to his “well-known exquisite and unrivaled style.” Cramer’s sonatas are specifically written for early Broadwood grand pianos, and the success of the “London Pianoforte School” was closely tied to that instrument, as the musical style was closely linked to that instrument’s tonal qualities and its manner of articulation.
Johann Baptist Cramer: Piano Sonata in A minor, Op. 53 “L’ultima” 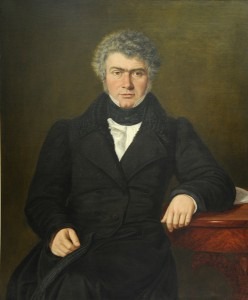 Meyerbeer reports “The pianoforte played on by Mr. Cramer was the most powerful and rich-toned we have ever heard.” And local critics added, “His interpretation of Mozart and his own compositions were like “breathings from the sweet south.” Meyerbeer also heard performances by other virtuoso pianists, including Kalkbrenner, Ivan Müller and Ferdinand Ries. Ries had settled in London in April 1813 and made a rather comfortable living as a composer, pianist, and music teacher. On his honeymoon he took his newlywed bride Harriet Mangeon on a romantic journey to the Rhineland, and composed a delightful sonata for flute, which he later arranged for clarinet.
Ferdinand Ries: Clarinet Sonata in E flat Major, Op. 169
Please join us next time when we accompany Giacomo Meyerbeer to Italy, and witness his first real successes as an opera composer.