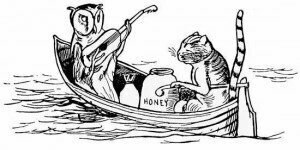 The Owl and the Pussycat, by Edward Lear

How do different composers approach the same text? In a recent review of a new biography of the poet and landscape artist Edward Lear, there was extensive discussion of the great love story Lear put into poetry. In its extensive whimsy, The Owl and the Pussycat was an inspiration not only for generations of children but also generations of composers.

The Owl and the Pussy-cat went to sea
In a beautiful pea-green boat,

It’s been set in the English choral style by John Rutter and in full 12-tone confusion by Igor Stravinsky. It’s a parlour song and Pop composer Laurie Anderson has set it as an extended vocalise. How do you think of your childhood friends?

In 1966, as his health was starting to fail, one of the last works Igor Stravinsky wrote was a two-part setting of Lear’s poem.

The Pig with the Ring in its Nose, by Lear

Mátyás Seiber’s 1953 setting for voice, violin, and guitar (or piano) seems to throw us back into the 19th century for a dramatic parlour setting of the poem.

Seiber: The Owl and the Pussy-Cat (Sarah Maria Sun, soprano; Felix Borel, violin; Carsten Linck, guitar)
Stephen Wilkinson’s sweet setting of the poem, with its wandering melody, seems to follow the travels of the duo in music.

Wilkinson: The Owl and the Pussycat (Clare Wilkinson, mezzo-soprano; Ian Buckle, piano)
Ronald Corp’s setting opens with a lovely pianistic representation of the boat on the sea. 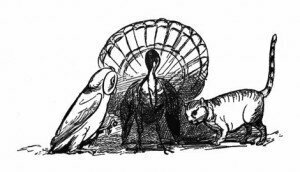 The Turkey Who Married Them, by Lear

Part of a collection of children’s poems and nursery rhymes, John Rutter’s setting of the Lear poem is a delight of unaccompanied 4-part singing.

Rutter: 5 Childhood Lyrics: II. The Owl and the Pussycat (Cambridge Singers; John Rutter, cond.)
Canadian composer Harry Somers’ 1988 setting for soprano, mezzo, and tenor divides the setting into characters with a narrator. It’s one of the most creative of the settings we’ve heard so far and closes with a mordent meow.

Somers: Birminal Trilogy: No. 1. The Owl and the Pussycat (Monica Whicher, soprano; Krisztina Szabó, mezzo-soprano; Michael Colvin, tenor; John Hess, piano)
And, finally, we close with a meditation on the poem by Laurie Anderson.