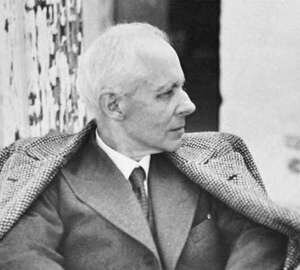 Béla Bartók did not see the premiere of his 3rd Piano Concerto. After completing the score—he wrote the Hungarian words “the end” after the last measures of this concerto—Bartók was transferred to a West Side hospital where he died four days later. On his last night at home, his friend and student Tibor Serly found Bartók in bed surrounded by medicine bottles and manuscript paper. He was feverishly trying to finish the orchestral score, but he already knew that time was running out. According to Serly, Bartók made it within seventeen measures from the end before he collapsed. Serly, in turn, deciphered the composer’s shorthand for the final measures and completed the score. Realizing the severity of his illness, Bartók had been hyperactive throughout his last year. He simultaneously worked on two major pieces, the Third Piano Concerto and the Viola Concerto, at once. Shortly before being transferred to the hospital he was drafting a seventh string quartet and even considered a commission for a double concerto for two-pianos. Apparently, Bartók told a hospital doctor, “I am only sorry that I have to leave with my baggage full.”

Bartók died at age 64 on 26 September 1945. A funeral service was held at Universal Chapel, and the burial took place at Ferncliff Cemetery in Hartsdale, New York. The funeral was a small family affair, and it included his wife Ditta Pasztory, their son Péter, and his pianist friend György Sándor. Bartók had been stimulated to write his 3rd piano concerto as a surprise birthday present for his wife Ditta. But remembering that he had arrived almost penniless in New York four years earlier, Bartók decided to leave his wife a composition that she might perform to help support herself as a concert artist after he was gone. In the event, it was György Sándor who first performed the work on 8 February 1946 in Philadelphia, with Eugene Ormandy conducting. It turned out to be Bartók’s most popular piano concerto.