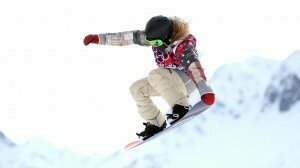 I watched with interest some of the Winter Olympics coverage from South Korea, in particular the snowboarding and skiing. It’s easy to spot the winners – people like Chloe Kim and Redmond Gerard (both from the US team): they display effortless grace and flow in their gestures, and those who totally “own” the course seem to create a through-narrative of seamless movement from start to finish, which reminds me of watching someone like the British pianist Stephen Hough in concert. In short, they make it look easy.

Liszt: Années de pèlerinage, 3rd year, S163/R10: No. 4. Les jeux d’eau à la Villa d’Este (The Fountains of the Villa d’Este)
Stephen Hough
As is often the way when I watch sports, I am struck by the similarities between sportspeople and musicians: that same effortless grace of the snowboarders and skiers is something we admire in highly-skilled musicians, and these are attributes, along with expression and communication, which make their performances thrilling and memorable.

Often when watching top sportspeople or musicians in action, we marvel at their “natural talent”. that ineffable, indescribable je ne sais quoi which places these people apart from the rest of us.

Top athletes are compelling because they embody the comparison-based achievement we….revere – fastest, strongest – and because they do so in a totally unambiguous way…..

Plus they’re beautiful: Jordan hanging in midair like a Chagall bride, Sampras laying down a touch volley at an angle that defies Euclid. And they’re inspiring…. Great athletes are profundity in motion

Like the rest of us, the commentators for the Winter Olympics are clearly fascinated and impressed by these extraordinary human beings, and there is much talk of “natural talent” and a sense of hero-worship and awe in the language used to describe them and their exploits. As a society, we are obsessed with the “myth” of talent and we have a long-held fascination with people we perceive to be “naturally talented”. From child prodigies to highly gifted performers and sports superstars, we view them as wonders of nature, imbued with enviable, raw natural talent.

What is the secret of these people’s talent? What is it that makes them so special, so different from the rest of us?

Unfortunately, for those obsessed with the myth of talent, the reality is altogether less exciting: notice how the BBC commentators rarely discuss these athletes’ training regimes. Why? Because talking about training is boring. To discuss something as pedestrian as training and practising removes the mystique surrounding these extraordinary individuals, and we would never want our sporting or musical heroes and heroines to appear “ordinary”. Would you rather watch Stephen Hough practising 70 repetitions of the same passage of Liszt at home in his studio or appearing in concert at Carnegie Hall?

Most of us are familiar with the “10,000 hours rule”, and while this theory has largely been debunked by more recent research, it serves to remind us that “putting the hours in” is a key factor in becoming extraordinarily proficient in a specific skill or field of study, be it playing chess, sport or musical performance. But it is not just about quantity of training; quality plays a more crucial role, for focused, intelligent and deliberate training or practise is what breeds results.

But what sparks the will to train in the first place?

Interest and the “rage to master”

If you haven’t got the interest, you won’t stick to the training regime. Sounds obvious, yet those who achieve what we call “expert status”, snowboarders and concert pianists alike, have an almost obsessive will to focus intensely on a specific subject, and will voraciously consume new information and acquire skills. Psychologists call this the “rage to master” and many top athletes and musicians can cite a specific moment, often in childhood, when the rage to master took hold, driving them to focus intently and intensely on their chosen activity.

To achieve a very high level of technical and artistic ability and success, regular, conscientious, and deliberate practice/training is crucial. This is not simply playing through your chosen repertoire or doing a few runs on the piste. Deliberate practice involves a hefty degree of goal-setting (daily, weekly, monthly and yearly, plus regular reviewing and adjustment of those goals), self-evaluation, critical feedback, reflection, analysis of minute details (such as body position, gesture, fingering schemes, etc, often using video or audio recordings), in addition to support and feedback from mentors, teachers, peers, colleagues and others. We know that repetitive practice is important to train the “muscle memory” or procedural memory, which allows Redmond Gerard or Stephen Hough to perfectly execute the slopestyle trick or complex passage of music, not just once but over and over again. These are not mindless repetitions, however, but repetition with reflection, evaluation and adjustment, so that each subsequent repetition improves on the previous one. In addition to all of the above, the ability to see the “bigger picture” of the slope or piece of music and the attendant ability to make decisions, large and small, about technique, gesture, expression, etc.

Grit is the disposition to pursue very long-term goals with passion and perseverance. And I want to emphasize the stamina quality of grit. Grit is sticking with things over the long term and then working very hard at it.

Some of us may start a training or practising regime with the very best of intentions, but soon fall by the wayside due to lack of focus, motivation, procrastination, and a whole host of other reasons (excuses!). Those at the top of their field have the determination to stick to the task, day in day out.

Mastery and the constant pursuit

Mastery is about embracing the role of the lifelong student and dedicating oneself to the pursuit of excellence. Read more about mastery here.

Nurture – the encouragement and support of family, teachers and mentors, coaches, colleagues and friends are important in fostering focus and determination in training.

When we consider all these factors, we truly appreciate how and why Olympic athletes and top-flight musicians are where they are professionally. We too can train and practise in the same way, using the same tools and focused mind-set. We may not touch these exceptional individuals nor come close to their greatness, but we can still strive for excellence in what we do.

‘How Tracy Austin Broke My Heart’ from Consider the Lobster And Other Essays – David Foster Wallace. Little, Brown & Company, 2008
Grit and the Secret of Success