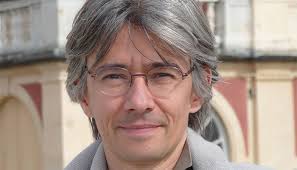 Éric Montalbetti started to make his music public in 2015, following 20 years at the Philharmonic Orchestra of France as Artistic Director. He had started composing at the age of 11 and did his studies at IRCAM and the Collège de France, but kept it secret until at age 43, he left the orchestra and struck out on his own. He used his compositions rather like a personal diary and wrote for a variety of solo instruments, and chamber, choral and orchestral music. 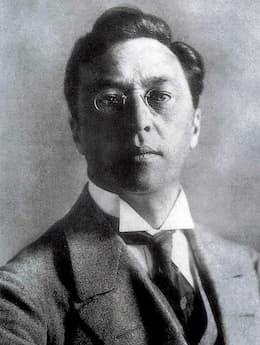 Montalbetti‘s piano work, 3 Études après Kandinsky, takes three paintings by the Russian painter Wassily Kandinsky as their point of inspiration. The paintings come from three separate decades and in them we can see Kandinsky’s growth as an abstract painter. To examine the works, we will go backward in time as Montalbetti’s first movement is from the most recent work. 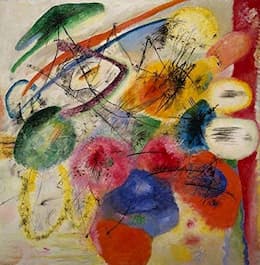 The first movement, Deux traits noirs, uses Kandinsky’s Traits Noirs from 1930 as for its basis. Balloons of colour angle from the centre, with blues and reds in the bottom right and greens and yellows in the top left. A broad red stripe comes down the right side. Over top are black lines, mountainous at the top and seemingly scribbled to fill in some of the lighter balloons. The composer sees the work as having a ‘cool reserve,’ and in response, wrote a piano part that uses the entire register of the keyboard. 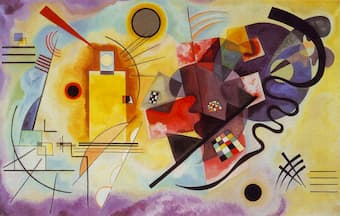 The second movement, De l’obscurité des sphères à leur éclat (From the Darkness of the Sphere to Their Brightness), takes the complex Yellow-Red-Blue from 1925 as its source. Full of sinuous curves and elemental shapes such as squares, circles, and triangles on the left side, the right side is dominated by abstract shapes. Curved and straight lines in black pierce through on both sides. The left side is bright with more regular shapes and the right side is darker and more abstract. The curves seem unite the two different sides. In his music, Montalbetti contrasts the darker left-hand sounds with the brighter right-hand sounds, almost reversing in sound the colours and images of Kandinsky’s work. 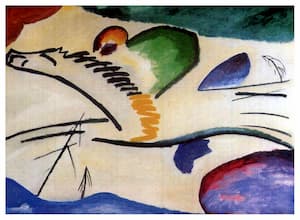 The last movement, Furieusement amoureux (Furiously in love) uses Lyrical (1911). Looking solely at the right side of the image, it’s pools of blue colour with what appears to be a bent-over tree. As the lines move to the left, we can start to reinterpret them as we see a horse’s neck and head and bent over them, a rider in green. It’s like a mix of abstract and medieval cave-painting. Montalbetti picks up on the furious movement of the horse and its rider and gives them motion.


By using Kandinsky’s abstract works as a source, Montalbetti gives us insight into his own abstract compositions.