Opinion
The Language of Music
by Frances Wilson August 30th, 2020 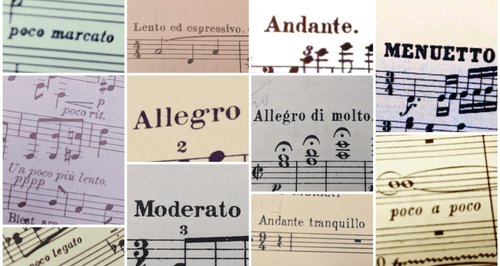 Music is a universal language and Italian is, largely, the language of music itself. It’s everywhere, nestled in amidst the dots and squiggles of the score, directing the musicians to play loudly (forte), or quietly (piano), or more quickly (accelerando) or slowly (adagio). To play the notes smoothly (legato), or short and detached (staccato), with special emphasis (tenuto) or delicacy (delicatissimo), and much more….Italian is used to convey virtually everything the musician needs to know to bring the ink on the page to life with vitality and expression.

From the Renaissance period, Italy established a linguistic dominance on much of European art music and the terminology quickly became habitual. Like notation, it provides musicians with a common language which is universal and are therefore understood across different countries.

Virtually every field or area of activity has its own specialist terminology (or jargon) and it’s significant because it gives that subject its own identity and culture. It provides a common language by which similar practitioners can communicate with one another. Scientists, medics, chefs, lawyers, and sportspeople all use jargon associated with their particular field and no one seems to have a problem with this. In fact, specialist terminology, especially that drawn from other languages (for example, deuce, sauté, quid pro quo, entrepreneur, siesta), enriches our own language and teases our curiosity.

The specialist terminology of classical music, on the other hand, apparently does not do this: it is regarded as in inaccessible and exclusive, and therefore “elitist”, and is regularly highlighted as a barrier to encouraging a wider audience to engage with the artform. (Curiously, such accusations are never levelled at sports commentary which contains some particularly impenetrable terms – leg before wicket (cricket), triple salto (gymnastics), offside rule (football), to name but a few.)


So what are we, the musicians – and others in the industry who “speak the same language” – to do? The wonderful thing about the Italian terms used to describe music is that they are, in themselves, evocative, musical and poetic – words like amabile (charming, gracious, or amiable), stringendo (pressing forward), dolce (sweetly), maestoso (stately, dignified and majestic). It would be a great shame if composers and musicians were discouraged from using their specialist language just to satisfy a minority of detractors who seek to dumb down the artform in the interests of audience accessibility. Today writers of programme notes or CD inserts often explain Italian terms to make them more comprehensible to listeners, and many contemporary composers use their native tongue in which to express musical terms, while also still adhering to the custom of using Italian terms. For audiences and others who are unsure about these specialist terms, there is a wealth of material available from which to broaden one’s knowledge.

To lose this specialist terminology would be an abandonment of a crucial part of the culture and practice of classical music, just as “offside rule” is part of the culture and practice of football. It also signifies a dumbing down and a general suspicion of expertise, highly prevalent today in the era of “fake news”, and thus the terminology of music should be celebrated and preserved.