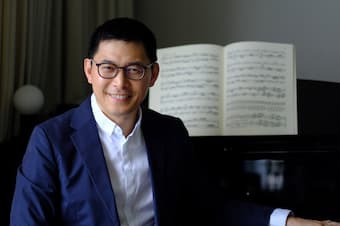 Forty years ago, the Hong Kong University Music Department was founded at the behest of then–Vice Chancellor Rayson Huang (1920-2015). He had come to Hong Kong in 1938 following the Japanese invasion of Shanghai to be a student at HKU, where he majored in chemistry. In addition, he was also an accomplished violinist. He was appointed Vice-Chancellor in 1972 and was the first Chinese to hold that position. Between his playing and his other musical skills, it was his love of music that prompted his founding of the HKU music department in 1981.

We spoke with Professor Daniel Chua, currently chair of the music department at HKU, about the department’s upcoming anniversary celebrations. The department will focus on one of the most important chamber works written during WWII, Olivier Messiaen’s Quartet for the End of Time, and look at it from its musical and theological background. A fervent Catholic, Messiaen imbued much of his work with his belief and with his concerns for the created order and so provide a fertile source for a discussion of his work. The HKU celebrations will occur on 30 September and 6 October and culminate with a concert on 8 October. 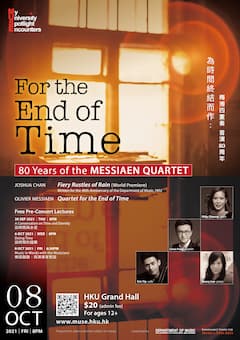 Starting on 30 September, you can join a zoom conversation on Olivier Messiaen’s Quartet between HKU composer Professor Chan Hing-yan and Professor Henry Shiu of Emmanuel College, the theological college of the University of Toronto. They will discuss various aspects of Messiaen’s Quartet, ranging from the composer’s unique musical language, inspiration from nature, devout Catholicism, to how his message of time and eternity resonates with us today. This Zoom lecture is free to all with pre-registration.

On 6 October, the annual Rayson Huang lecture will be on the subject of Doing Time: Messiaen’s Quartet for the End of Time, presented jointly by Professor Rebecca Rischin (Ohio University), and Professor Jeremy Begbie of Duke Divinity School at Duke University. Prof. Rischin, a clarinettist, and Prof. Begbie, a pianist, have their own familiarity with the Quartet as both musicians and scholars. They will share their perspectives on Messiaen’s Quartet in two 30-minute lectures, followed by discussion with Prof. Daniel Chua. This Zoom lecture is free to all with pre-registration.

The concert is on 8 October in the Grand Hall, Lee Shau Kee Lecture Centre, but before that, in a separate space, concert goers will have a chance to meet with the performers and hear their thoughts on the work that they will perform. Kitty Cheung (violin), Linus Fung (clarinet), Eric Yip (cello), and Nancy Loo (piano) will discuss how they take on such a momentous work. Admission is free with pre-registration.

And then, finally, the concert. Paired with Messiaen’s work is the world premiere of a new work by HKU composer Dr. Joshua Chan, Fiery Rustles of Rain, written for the 40th anniversary of the Department of Music but also written with the ideas of Messiaen in mind. The two works complement each other, one on its 80th birthday and the other new-born, but memorializing a 40-year-old institution. See here for information on how to purchase ticket. 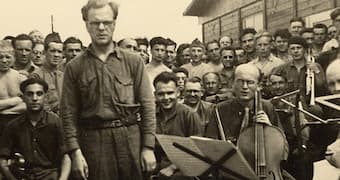 Messiaen’s work was written while he was imprisoned in the German prisoner of war camp Stalag VIII-A, Görlitz, after the fall of France in 1940. It was at that camp, using the instruments available in the camp, a B-flat clarinet, a violin, a cello, and later a piano, that he composed his work and where it was given its premiere. The other members of the quartet, clarinettist Henri Akoka, violinist Jean le Boulaire, and cellist Étienne Pasquier all were professional musicians. The work was initially a trio for the three players and later Messiaen added his piano part when a piano was brought to the camp.

The 8 movements are a mix of theological, environmental, and musical musings. The title of the work comes from verses 1-7 of the 10th chapter of the Book of Revelations: ‘And I saw another mighty angel come down from heaven, clothed in a cloud: and a rainbow was upon his head, and his face was as it were the sun, and his feet as pillars of fire. He set his right foot upon the sea and his left foot on the earth, and, standing upon the sea and upon the earth lifted up his hand to heaven and swore by Him that lived for ever and ever, saying: “There shall be Time no longer: but on the day of the trumpet of the seventh angel, the mystery of God shall be finished”.’

Messiaen made his own description of each movement:

Around five o’clock in the morning, a lone bird improvises, surrounded by fine fragments of sound, by a halo of harmony lost high in the trees. Transposing that to a religious level, you have the harmonious silence of heaven. The piano plays a rhythmic ostinato based on three Hindu rhythms; the clarinet spins out the song of a bird. 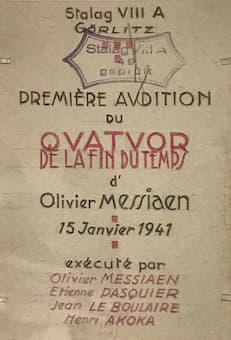 Invitation to the premiere of Messiaen’s Quartet © Wikipedia

The first and third parts (both very short), evoke the power of this strong angel, crowned with a rainbow and clothed in clouds, one foot on the sea and the other on land. The central section deals with the impalpable harmonies of heaven, the piano playing soft cascades of chords: blue and mauve, gold and green, red violet, blue orange; all of this dominated by steel grey. These chords, faraway chimes, surround the plainchant-like melody of the violin and cello.


III. “Abîme des oiseaux” The Abyss of the Birds:

Clarinet solo. The abyss is time, in its sorrows and lassitudes. The birds offer a contrast, symbolising our yearning for light, stars, rainbows and jubilant voices. The piece begins in sadness. Notice the long tones: pianissimo, crescendo molto to the most atrocious fortissimo. The bird songs are written in the gay and fanciful style of the blackbird. The return to desolation is manifested in the dark timbre of the clarinet’s lower register.

Scherzo. Of a more outgoing character than the other movements but related to them nonetheless by various melodic references.

Jesus represents, in this context, the word of God. One long, extremely slow phrase by the cello glorifies with tenderness and reverence the eternity of this powerful and gentle Word. Majestically the melody unfolds like a distant memory, tender and all encompassing. ‘In the beginning was the Word, and the Word was with God, and the Word was God.’

Rhythmically the most idiosyncratic movement of the set. The four instruments in unison give the effect of gongs and trumpets (the first six trumpets of the Apocalypse attend various catastrophes; the trumpet of the seventh angel announces the consummation of the mystery of God). Music of stone, formidable sonority; movement as irresistible as steel, as huge blocks of livid fury or ice-like frenzy. Listen particularly, toward the end of the piece, to the terrifying fortissimo of the theme in augmentation and with change of register of its different notes.

This movement is dedicated to the angel, and even more so, to the rainbow covering him (a rainbow symbolising peace, wisdom, and all luminous and resonant vibration). ‘In my coloured dreams I hear and see ordered melodies and chords, familiar hues and forms; then, following this transitory stage I pass into the unreal and submit ecstatically to a vortex, a dizzying interpenetration of superhuman sounds and colours. These fiery swords, these rivers of blue orange lava, these sudden stars: Behold the cluster, behold the rainbows!’


VIII. “Louange à l’Immortalité de Jésus” In Praise of the Immortality of Jesus:

A broad violin solo, balancing the cello solo of the fifth movement. Why this second tribute? It addresses more specifically the second aspect of Jesus – Jesus the man, the Word made flesh, raised from the dead and immortalised to make His life known to us. This movement is pure love. It ascends gradually toward an intense peak, the ascension of man towards God, of the Son of God toward his Father, of the creature become divine towards paradise.


In the context of a chamber concert, we may not be as familiar with the theological side as we are with the musical side. When we consider the conditions when Messiaen wrote this work, however, it is that theological side of him that emerges triumphant. In the darkest of days, Messiaen has given us a miracle of music, a work that has become an inspiration for the generation of composers who followed him, and a work that transcends time and war to give us, in the end, peace.

Join the HKU Music Department in their anniversary celebration and participate in a unique set of discussions around a work that you will never forget.