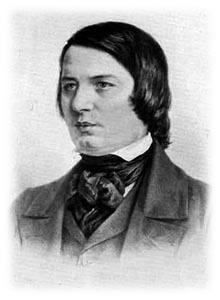 Robert Schumann (1810 – 1856) is widely regarded as cornerstone to Germany’s romantic era. Not only was he an accomplished composer, he also inaugurated and published for Die Neue Zeitschrift für Musik (the New Journal for Music), one of the most important musical publications of the nineteenth century.

Yet amidst his musical and editorial successes, the most life-changing event was possibly his marriage to Clara Wieck (1819 – 1896). Wieck did not only stand out as a wife and mother, bearing him seven children and caring for him throughout his years of sickness, she was also a talented pianist herself. She encouraged Schumann to expand his repertoire beyond the piano to include symphonies, and Symphony No. 4 was written in commemoration of her birthday. She also contributed heavily to Schumann’s popularity by performing his works for many years after his death.

In 1843, the Leipzig Conservatory of Music hired Schumann as a piano professor. Sadly, his neurological problems inhibited his capacity for teaching and composing. Twelve years later, an attempted suicide left him confined to a private mental institute near Bonn, where he passed away two years later. 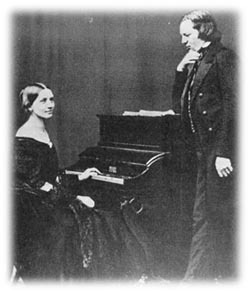 It is widely rumoured that Schumann had contracted the sexually-transmitted disease syphilis during his lifetime. His youth was a ‘playful’ one, as reflected in several piano compositions that he named after different women. It was not until 1991 that disclosure of his diary entry confirmed that he was indeed diagnosed with syphilis in 1831.

Although an autopsy was carried out following Schumann’s death, the record had mysteriously gone missing. Thus, for years it was believed he died from tertiary syphilis affecting his brain. Yet, it continues to puzzle the medical world why his wife, who had bore him seven children, did not suffer from any symptoms of syphilis, and was even able to perform normally for many years thereafter.

The record of the autopsy was finally rediscovered in 1973. Richarz, the director of the hospital in which Schumann was admitted, carried out the autopsy. He wrote that Schumann’s brain weighed 1336 grams and showed no signs of shrinkage. Although the lower base of his brain revealed an unknown gelatinous tumor, there were neither signs of inflammation nor any signs of syphilis. The report had supported none of the hypotheses surrounding Schumann’s underlying illness in the literature.

For this reason, the medical view of Schumann’s death changed. It turned out that Schumann has been wronged for many years—syphilis was not the cause of his mental problems. However, he did suffer from manic depression which caused him to fluctuate dramatically between heightened excitement and severe depression. At times he was unable to write anything, and at other times he displayed outrageous productivity. For example, in the year he married Wieck he had produced one hundred and fifty piano pieces.

Patients of manic depression often report feeling invincible during episodes of mania. Schumann’s high regard for his own musical hallucinations corresponded with this. It may further explain why schizophrenia was present amongst his children. Schumann’s bouts of mania and depression were also reflected in his letters and writings. He signed the name ‘Florestan’ in times of heightened emotions, but took the name ‘Eusebius’ when severely depressed. Critics say that his greatest work, ‘Kreisleriana’, actually resembles the two poles of his manic depression. The second, fourth and sixth movements are in B-flat major, while the third, fifth and eighth chapters are in G minor; the first three movements are melodically slow and reflective, while the last three are energetic and lively.

Besides Schumann, other renowned composers who may also have suffered from manic depression include G.F. Handel, O Klemperer and Gioacchino Rossini. Before the age of thirty-seven, Rossini wrote 37 operas, yet his productivity declined dramatically in the next forty years when severe depression prevailed. Many people attribute his early years of heightened creativity to his manic depression.

Schumann also suffered from a condition in his right hand which numbed and stiffened his fingers. He started to complain of this problem from the age of 22 and was told that prolonged piano-playing would have affected his arms as well. As with his mental illness, people used to say it was the syphilis. However, just as rumours tainted his early death, syphilis had nothing to do with it. Recent medical analyses reveal that Dystonia, a neurological disorder which causes involuntary muscle contractions, was the real cause to blame.