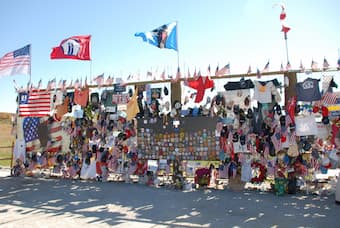 British pianist Adam Swayne’s latest disc marks the twentieth anniversary of 9/11 – a date which is deeply, painfully etched on our collective modern memory – and seeks to demonstrate ways in which composers memorialise or commemorate disaster through works by three American composers which deal with the events of 9/11 and their aftermath.

Karen Walwyn’s suite ‘Reflections on 9/11’ reference September 11, 2001 directly, and the time since, but the attacks themselves are absent. Instead, in Anguish (No. 3), a plaintive melody is grafted onto an undulating, unsettled accompaniment redolent of Ravel’s Ondine. Growing increasingly textural and virtuosic, the music descends into trauma, with dissonant bell-sounds heard through a hectic melee of notes, before a reprise of the opening. Burial (No. 6), by contrast is sombre and introspective with an ostinato bass overlaid by a haunting falling melody. A series of key changes lift and pierce before the music settles back into f minor with a sense of acceptance and emotion all but subsided.


These two pieces set the tone for the whole album: here we have music which memorialises rather than portrays the actual cataclysmic events, with a range of emotions from profound melancholy to anger, sorrow to resignation. 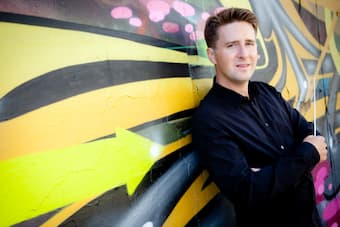 The centre-piece of the disc is ‘Sudden Memorials’, a brand-new work by Kevin Malone, who has written more music commemorating 9/11 than most composers. In 2006, he visited Shanksville, Pennsylvania, close to the crash site of United Airlines Flight 93. The perimeter fence is adorned with objects of remembrance and honour, left by visitors to the site; such public forms of commemoration have become common in recent years (flowers, candles, stuffed animals, religious objects) as a means for people to mark their own history and to create a public space for individuals and communities to unite in and express their grief. Malone’s 30-minute composition captures in sound the instant and transient memorials that friends and relatives leave at the scene of a tragedy. Specially commissioned by Adam Swayne, the music reflects these myriad, fleeting memorials through brief quotations from and references to, for example, hymn tunes, sports songs, gospel, Debussy, Chopin, lounge jazz and even birdsong; like the personal memorials on the Shanksville fence, these musical fragments are intended to trigger emotional responses from innocence and hope to grief, resignation and spiritual contemplation.

The other contemporary work on the disc is ‘Missing Towers’ by David Dei Tredici, the third part of his four-part Gotham Glory (2004). A two-part canon is used to symbolise the Twin Towers, while the music seeks to portray in miniature the epic scale of the absence and emptiness created by the collapse of those buildings. An arresting, reflective piece and a fitting close to the album.

These contemporary pieces are interleaved with works by American composers from a century earlier. ‘The Tides of Manaunaun’ by Henry Cowell (1897-1965) was inspired by Irish mythology and portrays the marine effects created when Manaunaun, the Irish god of the sea swayed the particles of the cosmos in rhythmical, tidal movements “so that they should remain fresh when the time came for their use in the building of the universe” (Henry Cowell). The pieces require the pianist to use the forearm to play large note clusters and the resulting timbres, textures and rolling rhythms are evocative of the violent movement of the ocean (and by association, perhaps, the roar of explosions and the sounds of falling buildings?). Over this dramatic, plangent bass line is a melody suggestive of an American hymn tune or spiritual. By contrast, ‘Fabric’ is almost romantic in style, but its contrapuntal lines and twining melody ensure the music never fully settles. In ‘Aeolian Harp’, Cowell utilises the piano’s strings which are strummed and plucked to create a piece of naive intimacy and delicacy.

Solace by Scott Joplin draws on Cuban habanera and Argentine tango, as well as the African American Ragtime for which Joplin is best known. Not only does the work create an interlude of calm and reflection, it is also a reminder of the diversity of America’s culture and its people. 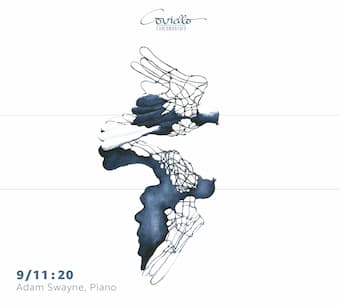 Adam Swayne is masterful and convincing in this repertoire, bringing virtuosic swagger when required, tempered by sensitively shaped phrases and spare rubato. The emotions and memories aroused by the music are never far from the surface, but Swayne ensures the main message remains clear: this is music about remembrance, reflection and commemoration. Like his previous album, Speak To Me, Swayne has brought together a fascinating range composers and music whose fundamental messages will resonate with many people. This is his personal memorial to the terrible events of 9/11. The album cover image is a print of a wire sculpture by Scottish artist Vanessa Lawrence called “Together”. Vanessa was undertaking an artist residency in the North Tower on 9/11 and witnessed the terrible events at close-hand.

9/11 : 20 is available on the Coviello Contemporary label and via streaming services

Adam Swayne’s career spans the roles of soloist, composer, conductor and teacher. He takes an inclusive and innovative approach to performance, putting communities at the heart of the music-making.

Adam is Deputy Head of Keyboard Studies at the RNCM and a Senior Fellow of the Higher Education Academy. He studied as a Fulbright Scholar with Ursula Oppens at Northwestern University in Chicago between 2003 and 2006. He has been fascinated by America and American music ever since.

Adam’s first CD for Coviello, (speak to me), featured American political music ranging from Amy Beth Kirsten to Rzewski, was selected as an Instrumental Monthly Choice by BBC Music Magazine, and received two nominations at the 2019 Opus Klassik awards in Germany.

Adam is concerned with the importance of music in commemoration. In 2012 he organised concerts for the centenary of the Titanic disaster, including a performance of Gavin Bryars’ The Sinking of the Titanic in Southampton’s Guildhall on the exact anniversary of the tragedy.