The Russian maestro Yuri Temirkanov will be bringing the St. Petersburg Philharmonic to the Guangzhou Opera house in October and in anticipation of his visit, we got him to answer a few questions.

When cultural relations between the US and Russia were resumed after the end of the Afghan war in 1988, it was Maestro Temirkanov who was the first Soviet artist permitted to perform in the US. We asked about that trip. He said that the trip went well with few problems but that his artists, although they were really at the top of their fields, were unknown in the West. He viewed his own career as being a bit more open than his artists’, but always with the Soviet government behind him, dictating where he could go and what he could perform. 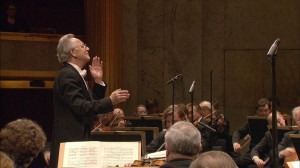 As relations between Russia and the West normalized, Russian conductors could take on positions outside their country. As a conductor in places as disparate as Copenhagen, London, and Baltimore, he felt that each orchestra had its own traditions and regulations but this did not affect their music-making. The first class orchestras in America and Europe have their own character but he felt that this is largely discernable only by a professional.

We asked him about the rise in touring by orchestras such as the Mariinsky, and he noted that it has become much easier than it used to be. Touring is important: it permits an international exchange of knowledge. He indicated that it is now “possible to hear and to see what is happening in the musical world.”

In relation to his long association with the St. Petersburg Philharmonic, we asked Maestro Temirkanov about the advantages and disadvantage of working with one ensemble for such a long time. Did he face problems with motivation? With repertoire? And we also asked if the modern tendency towards short attention spans affected the programming, He replied with a look at the duties of a conductor:

The most challenging aspect of being a conductor is to find the best artistic and human contact with the orchestra one is working with. Also, the challenge is to maintain this relationship and to inspire the musicians to give you their best. The most rewarding aspect is when you achieve this and know that musicians feel that you have a right to stand in front of them. In principle I face no problems.

I think that real art, not only music, any form of art, can be appreciated in full only by exclusive part of the society. This was always the case, in all times. Of course now we try to broaden our audience. This is what we work for – to make music interesting to the public so that they wish to come to our concerts and won’t be disappointed. One can say many pretty words to answer this question. But in the end, the aim is to satisfy the public.

Maestro Temirkanov will be performing at the Guangzhou Opera House on 16 October with the St. Petersburg Philharmonic leading a program of Tchaikovsky and Ravel:

MUSSORGSKY/RAVEL: Pictures at an Exhibition