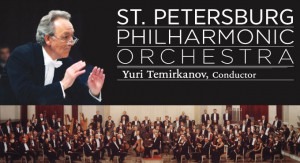 Temirakov will bring two works by Tchaikovsky: Francesca da Rimini, a symphonic fantasy based on a story of forbidden love from Dante’s Inferno, and the Variations on a Rococo Theme, a work for cello and orchestra commissioned the same year as Francesca (1876). The style of the St. Petersburg performance will be in keeping with their background. Founded in 1802, the orchestra has a confident and focused sound and is considered the leading orchestra for setting the standard for performances of Tchaikovsky and other Russian masters. The other work on the evening’s program is a curious, but familiar Russian and French mix. Mussorgsky’s Pictures at an Exhibition was originally written for piano but has had dozens of versions created by composers over the decades, beginning in the later 1880s after the death of Mussorgsky, with one of the latest orchestrations being done just a couple of years ago. For the background on the piece and a few of the pictures at the exhibition, see Walking Around Art. 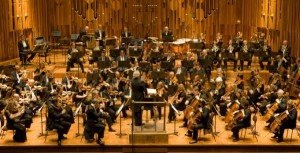 In December the London Philharmonic under Vassily Sinaisky will be bringing one of the loudest symphonic works by Tchaikovsky, his 1812 Overture, and a selection of quieter waltzes from his ballets, operas, and symphonies. The other work on the program is Chopin’s Piano Concerto No. 2. This orchestra brings not only its reputation as one of the world’s finest orchestras, but also its reputation as one of the UK’s most adventurous orchestra. The latter part of their reputation won’t be visible in this concert, but it does touch on their sound. As a contrast with the highly-trained and technically secure Russian orchestra , the LPO take a lighter route, and you’ll hear things in the music that are shaded a bit differently. For example, in looking at a work that the St. Petersburg Philharmonic is bringing, you might find a sonic difference.

Just comparing these two recordings’ first minute immediately shows the difference between the two orchestras – the St. Petersburg is controlled, restrained, with a hint of placidity, while the LPO feels as though it’s pushing the boundaries and, with its greater flexibility, is able to show a wider variety in emotion in the music.

This difference doesn’t mean that one orchestra is better than the other – it shows the value of interpretation. And, in the end, this is wonderful for the audience – the opportunity for a visiting orchestra means an opportunity to hear music anew. When you’re used to one particular sound, either because that’s the recordings that you know or that’s what your local orchestra plays, then hearing music with a new orchestra can often mean that you hear the music in a way that can show you other aspects of the music. It might be something that you heard, but didn’t listen to.

The Saint Petersburg Philharmonic Orchestra with Yuri Temirkanov will be performing on 16th Oct. at the Guangzhou Opera House.

The London Philharmonic Orchestra with Vassily Sinaisky will be performing on 30th and 31st Dec. at the Guangzhou Opera House.