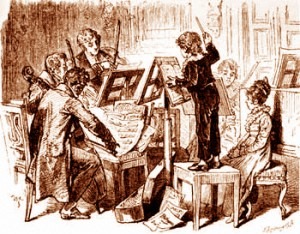 Everybody in the Mendelssohn Berlin household was interested in arts and humanities. The home served as a center for intellectual socializing, political discussions, but also for making music. Felix’s compositions were routinely performed during the “Sunday Music,” and it soon became the favorite meeting place for musicians and music lovers. And so it comes as no surprise that music always played a most important role during the celebration of Christmas. Fanny Mendelssohn reports on December 25: The Christmas candles are burnt down, the beautiful presents stowed away, and we spend our Christmas day quietly at home. Mother is asleep in one corner of the sofa; Paul in the other, Rebecca absorbed in the Fashions…Our Christmas Eve was very merry and pleasant. Felix had written for Rebecca a children’s symphony with the instruments of the Haydn one, which we performed. For me he has written a piece of a different kind, a four-part chorus with small orchestra accompaniment on the chorale “Christe, du Lamm Gottes.” I have played it several times today; it is most beautiful.

In hopes of introducing English audiences to his recently completed “Scottish Symphony,” Felix Mendelssohn arrived in England on 29 May 1842. He also hoped that the work might receive a royal endorsement, which sadly never materialized. As such, he was looking forward to introducing his wife Cécile to London. They stayed at Denmark Hill, south of the Thames with the Benecke family, cousins of Cécile. Suburban accommodations none withstanding, the Mendelssohn’s received three or four invitations a day from places as far fledged as Cambridge, Manchester and Dublin. Cécile got on splendidly with Charlotte Moscheles, and Felix publically improvised on the organ at St. Peter’s, Cornhill. During this same visit Mendelssohn met with Prince Albert at Buckingham Palace and had his first audience with Queen Victoria as well!

Felix Mendelssohn: 6 Kinderstücke, Op. 72 (Christmas Pieces)
When he was not busy chasing after royalty or performing in one function or another, Felix much enjoyed playing with the Benecke children Eduard “Teddy” and Elisa Cornelia “Lilly.” He even wrote down four little piano pieces in each child’s piano album with the dedication “as a souvenir from Felix Mendelssohn Bartholdy, or rather “Peter Meffert of Buxtehude,” which was Mendelssohn’s nickname with the family. Mendelssohn prepared six of the pieces for publication as “Kinderstücke” in 1846, but their release was delayed until December 1847, one month after Felix’s death. It was Cécile who arranged for the publication of these miniatures with the London publisher Ewer & Co. as Op. 72. She remarked at the end of November 1847, “Already around this time last year my blessed husband wanted to publish them as a sort of Christmas present for children; he thought of it too late, when there was no longer enough time to send it away, and he thought it could wait until the next year. Now I believe that I am acting in the way he would have wanted.” Comparable to the Songs without Words and not really dedicated Christmas music, the set was published under the title “Six pieces for the Pianoforte, composed as a Christmas present for his young friends, by Felix Mendelssohn Bartholdy.” The pieces are not meant to convey a special yuletide character, but in a nostalgic and self-reflective juvenescence, recall the wonders of childhood, especially around Christmas time. Merry X-Mas with Felix Mendelssohn!