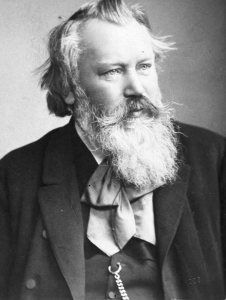 In his later years, Johannes Brahms looked like a veritable Santa Claus! With his flowing full beard and mischievous blue eyes, he’d be the star of any Christmas parade! With Christmas just around the corner, let’s have a look at how Brahms spent this special time of year. Brahms was a baptized and confirmed Lutheran, and the celebration of Christmas was an important part of his childhood. At the age of 13, Brahms sent his parents two versions of the same letter. One was in French and the other in German! “Today when the Christmas festival renews itself,” he writes, “this festival so joyful to every person, I feel myself permeated with the spirit of thankfulness, directed towards the Deity, as well as towards you, beloved parents. When I count all the good deed and care you have continuously heaped upon me, I do feel that I am still too weak to thank you sufficiently, but at least I will strive always to conduct myself so as to earn your love and to provide the joy of your old age. Accept here my felicitations and the passionate wishes, which I send to the Eternal one to extend your life to the greatest old age.” You can probably tell by the gushy prose and the French translation that the young Brahms was working on some kind of school project!

The Brahms household was always brightly decorated at Christmas time, and the young Brahms apparently greatly enjoyed the festive candle illuminations. Not unexpected, his favorite time was the customary exchange of gifts. However, already at this early stage in his life, he much preferred to give presents rather than to receive them. Brahms retained this generosity, and a child-like demeanor around Christmas time throughout his life. He bought the latest model sewing machine for his sister and a bunch of expensive toy soldiers for the Schumann boys. As it turns out, Brahms was really a shopaholic! For many years during his adulthood, he was highly indifferent to organized religion. The bible, as he wrote to Clara Schumann “is simply a repository of experiences and wisdoms rather than a definition of Christian creed.” He declined all invitations for Christmas Eve, choosing instead to roam the local Christmas markets for suitable presents for family and friends. Only on very rare occasions did he spend Christmas with Clara Schumann.

During the last decade of his life, Brahms changed his routine. In the morning of 24 December 1890 he writes to Clara Schumann, “How could I be better occupied than sitting in imagination beside you at your breakfast table and talking and listening and hearing all about the kind and charming things you are preparing. Here next door in my library there also stands a beautiful large tree, which will remain concealed until this evening from my housekeeper’s two darling boys. We could not have finer Christmas weather. All the trees and bushes are covered with frost and snow and it is a real joy to go out for a walk in the mild air… But I will not detain you any longer… Wishing you a very happy Christmas and New Year, Your Johannes.” Christmas Eve was then spent with his circle of friends. He greatly enjoyed spending time with the Fellinger family, and was happy, at least for one evening of the year, to be in the midst of an extended family gathering. On Christmas day Brahms took his lunch at his favorite tavern, the “Red Hedgehog,” and had a long nap in his favorite coffee shop in the afternoon. Sufficiently rested, he returned home to supervise his housekeeper Frau Truxa packing his bags in preparation for his departure to the Duchy of Saxe-Meiningen where a music festival was annually performed in his honor. Brahms kept up this particular Christmas routine until his death in 1896.

But Christmas was also a time to make money! Brahms made sure that he had new compositions ready for the holiday season. As Eduard Hanslick reports, “For years now we have received a holiday gift from Herr Brahms’s talent, and it pleases me to say that this year, too, his songs make excellent Christmas presents.” Brahms’s vocal and choral music occasionally touches on Christmas themes, including some of the Marienlieder and folk song settings. But most notable, perhaps, is the gentle lyrical Geistliches Wiegenlied (Sacred Lullaby), Op. 91, No. 2. Scored for contralto, piano and viola, the composition builds around the old Christmas folk song Josef, lieber Josef mein, also known as Resonet in Laudibus. Although published in 1884, the Geistliches Wiegenlied originated 20 years earlier as a gift for Joseph Joachim and Amalie Schneeweiss, his wife to be.