The Prince of Harp 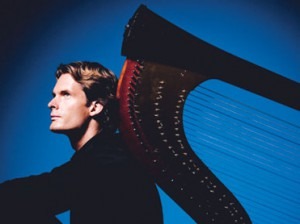 Tall, charming, intelligent were words that came to my mind when I first met French harpist Xavier de Maistre for a recording session at a radio station. Xavier shines through his beautiful playing, eloquence, and polite demeanor. One would presume that his path would have been smooth, with such talent and personality, however, Xavier was not supported by his parents to pursue a musical career at the beginning. He read political science at the Ecole des Sciences Politiques in Paris and later at the London School of Economics. The road became clear to him when he became solo harpist of the Vienna Philharmonic Orchestra at the age of 25, a position which he then gave up in 2010, in order to embark on an exciting journey of being a soloist.

JL: What drew you to the Vienna Philharmonic Orchestra?

XM: When I was a child, Vienna was my dream. I watched their New Year Concert every year. I was lucky to be able to enter the VPO at 25. I love the sound of the orchestra, especially the strings, because all the strings players come from the same school and that they were able to produce a unifying tone. I love operas and there is the Vienna State Opera. Also, in Vienna, you have the world’s best conductors and amazing halls.

JL: Which conductors do you enjoy working the most?

XM: Riccardo Muti. He is a very humble person, always putting the music first. He invited me to Paris to play a harp concerto. Nicolaus Harnocourt is very interesting and he knows a lot about style. Daniel Barenboim is a real genius and he knows everything by heart.

JL: The repertoire for harp is limited. Would you try to enrich it?

XM: Unlike violinist or pianist, I as a harpist, have to make arrangement or ask composers to write music. Nevertheless, I can bring freshness to our audience because it is always like a big discovery for them. For example, in my Mozart album, we rearranged Mozart’s piano concerto for the harp. Changing piano music to harp is suitable because both instruments require the coordination of right and left hands, producing polyphonic music. Next season, Penderecki will write a harp concerto for me and I will perform it with Orchestre deParis and the London Philharmonic Orchestra with Gergiev conducting.

JL: Are you from a musical family?

XM: I am from an academic family. In fact, I am the first musician. I read economics and politics in university, later at LSE. My parents did not agree for me to pursue a musical career. But I love to be on stage. When I was 16 or 17, I was winning competitions. Then, when I was in London, I went to Covent Garden every night, to watch an opera. I have good coordination, fast fingers, and good memory. That gave me advantage in learning harp.

JL: Apart from performing, I know that you are teaching too. With such a busy schedule, how do you find time to develop yourself as an artist?

XM: I teach in Hamburg. I have eight students and I travel there twice a month to teach them. I really like helping them to develop. As for myself, I have no life, but work. I learn quickly and I am well organized. Of course I like hanging out with friends, but I need to have very good discipline. When you are a soloist, you need to have a schedule, so that you are able to find time to learn. Next year is very busy as I will embark on a big tour in Asia, with Japan’s NHK and concerts in China. There will also be new projects, which has never been done before. I am very happy to be a pioneer.

JL: Besides music, do you have other passion in life?

XM: When I was young, I was in the rowing team. But I don’t have time to row now. Even though I travel so much, I still do fitness every day. I also love architecture and enjoy discovering new buildings when I am on the road.

Xavier de Maistre will be performing in HK on 19th April, 2013 at HK City Hall.