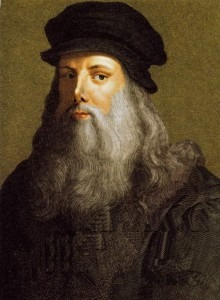 Throughout most of his life, the Renaissance polymath genius Leonardo di ser Piero da Vinci (1452-1519) kept a daily journal. He meticulously recorded daily events and engagements, including shopping lists and people who owed him money. Yet, these journals also contain drawings and notes on an infinite variety of inventions, artworks and scientific theories. In all, about 13000 pages grouped into variously sized notebooks exist worldwide, and are housed in libraries, museums or located in the hands of private collectors; even Bill Gates owned a da Vinci notebook! The largest bound volume of da Vinci notes is the Codex Atlanticus, compiled by the Spanish sculptor Pompeo Leoni in the late 16th Century. After Leoni’s death, the manuscripts were bought by Count Galeazzo Arconati and eventually donated to the Bibiloteca Ambrosiana in Milan. Napoleon Bonaparte transferred the manuscripts to Paris in 1796, but the Congress of Vienna restituted the collection 1815, and the codex was returned to Milan where it still resides presently. The Atlantic Codex comprises 1119 pages in 12 volumes — 100 pages of writing and 1750 sketches and drawings — dating from 1478 to 1519. Topics include, flying machines and studies on flight, war devices, machines for use with and on water, industrial and building machines, geometrical studies, notes and drawings on astronomy, botany, architecture, anatomy and theatrical machines, including mechanical lions and robot soldiers. 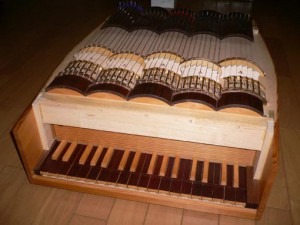 But most fascinating for our purposes are two designs for musical instruments! Not surprisingly, Leonardo was a skilled musician. He had a beautiful singing voice and frequently entertained friends and relatives. He also taught himself to play the lyre, and it was said that he could brilliantly improvise his own songs. Leonardo did enter into the services of the Sforza family, and in 1482 designed a silver lyre in the shape of a horse. Contemporary records suggested that Leonardo was a far better musician than any performer at the court, and his fellow Renaissance polymath Michelangelo snidely referred to him as “that lyre-player from Milan.” The Atlantic Codex does include a design for a lyre, with the strings attached to the skull of an animal, which serves as the sound box. However, a much more original design emerges on Folio 837 recto, probably dating from between 1503-1505. Here Leonardo conceives of a mechanical drum, mounted on a cart and pulled in motion by the performer. Five drum- sticks on each side of the drum membrane are attached to two lateral gears fitted with pegs. The relative position of the pegs can be changed, resulting in different combinations of rhythms. A most ingenious design for a portable musical instrument, however, emerges on Folio 93 recto, dating from between 1478 and 1482. Identified as a “Viola Organista,” (Harpsichord-Viola), it simultaneously combines the properties of a keyboard and a string instrument.

The instrument is worn around the waist and strapped to the musician’s chest — modern reconstructions weigh in at a robust 33 pounds — and the musician positions both hands on the keyboard, just as one would on a harpsichord or piano. Inside the instrument, a complex system of cams and pulleys — powered by the performer’s legs — sets a looping bow in motion. When the keyboard is played, corresponding strings are pressed into the bow, producing the required pitches. Creating a sound similar to the viola, the advantage of Leonardo’s design lies in the instrument’s ability to play chords. Apparently, Leonardo never actually built this experimental and unique instrument, however, the German instrument maker Hans Haiden constructed a similar instrument — we are not sure if he had access to Leonardo’s design — in 1575. Haiden’s instrument called Geigenwerk (Mechanical Strings) was reconstructed by Akio Obuchi in 2004, and Leonardo’s design realized by a group of New York enthusiasts. It has long been conjectured that Mona Lisa’s enigmatic smile stems from her knowledge of Leonardo’s homosexuality. Alternately, is it not also possible that Leonardo has just told her about his designs for the “Viola Organista”?