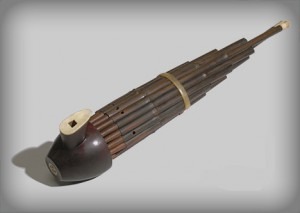 Gourd instruments generally fall into one class – the sheng. These are free-reed mouth organs, much on the order of a harmonica, but which also have bamboo pipes coming out of a central chamber. This chamber used to be made from a gourd or a hardwood, but now are more often made of metal.

The player blows into the mouthpiece, the gourd/metal chamber fills with air and then the player manipulated the fingerholes on each pipe to play. Unlike a harmonica, where the sound comes only from the openings where the player is blowing, the sheng permits polyphonic sound – more than one pitch playing at once – of notes that are widely separated. Since the player is also able to control the airflow – the sound can be quite well articulated.

Gao and Wang: The Reservoir Attracts A Golden Phoenix (Xu Chao-ming – sheng; Shanghai Virtuosi; Xia Fei-yun – Conductor)
These instruments can come in a variety of sizes – the smaller have the higher pitched notes and the larger have the lower.

To see an absolute master of the instrument, the player Wu Tong is the man to watch. 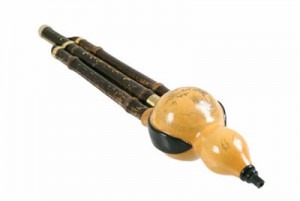 Notice that his instrument has both finger holes and keys that enable him to control holes further up the pipe.

The Hulusi is a similar kind of instrument, but only has 3 pipes. The instrument is end-blown, rather than with a side-attaching mouthpiece as in the sheng. Only the central pipe has finger holes for pitch – the two outside pipes are drone pipes and have a single finger hole to open or close the pipe.

What’s interesting in the performing technique is the shading of the pitch by half-closing the finger holes.