The World Orchestra for Peace is a band like no other. Apart from it being formed from the best orchestral musicians handpicked from around the world, it has a loud and clear message: to be a global ambassador for peace. I talked to Charles Kaye, the Orchestra’s Director and Co-Founder, who has lived, breathed and nurtured the group, right from its germination and first concert in 1995 in the hands of Georg Solti, through every one of its 20 concerts since then under the conductorship of Valery Gergiev. 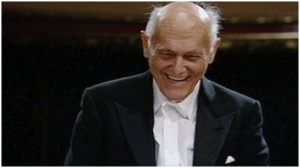 Sir Georg Solti, WOP Founder, at the conclusion of conducting the opening work, Rossini’s William Tell overture, at the first concert of the World Orchestra for Peace, Victoria Hall, Geneva on 5th July 1995

As can be seen in their recent documentary, Solti’s Vision (link below), the idea for the Orchestra was born after a surprise concert given at Buckingham Palace in 1992 for Solti’s 80th birthday.  15 players, one each from the 15 orchestras all over the world that Solti had conducted in his 80th year, were brought together by Charles, gave a performance of Wagner’s Siegfried Idyll, which prompted Solti in 1993 to propose an orchestra that demonstrated the ability of music to transcend nationalities. ‘I feel quite proud, since it was my idea that sparked Solti’s mind towards developing this concept!’ exclaims Charles. Solti’s idea grew from that date into what would eventually become the World Orchestra for Peace.


On average, no fewer than 35 countries are represented, with sometimes the number topping 50, and with this in mind, the administrative and logistical challenges of assembling such an orchestra are huge. ‘I was compiling a list of the best orchestral players in the world,’ Charles explains, ‘so after 18 months of assembling the players, we approached the first rehearsal with some degree of excitement and curiosity. I had the entire orchestra list in my head, and couldn’t believe that after all this time, all this planning, that everybody was actually there!’

To this day, the players and their conductor perform without a fee. What is their incentive for coming together time after time?

‘They all come for the same reason. They accept the invitation to participate understanding that they’re not coming either for money or for self-promotion, but to work, blend with and enjoy the company of their outstanding colleagues from around the world, with a specific aim in mind; to make beautiful music together for peace. They’re there for the public benefit and hopefully those who are in a position to influence the course of peace in our political world, to make them think ‘maybe we can take a lesson from these musicians’’. 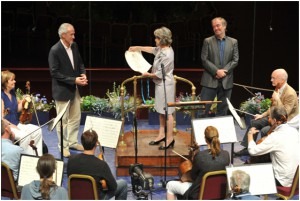 Irina Bokova, UNESCO Director-General presents the designation UNESCO Artist for Peace to Charles Kaye and the members of the Orchestra in the presence of Maestro Valery Gergiev at the Royal Albert Hall,
London on 5th August 2010

The World Orchestra for Peace was designated a UNESCO Artist for Peace in 2010. Apart from the symbolic recognition of the Orchestra’s work, Charles speaks of the orchestra’s responsibilities in such a role.

‘We wish to work to further the aims of UNESCO, which are to demonstrate to the world that there are all sorts of ways culturally that one can interact peaceably with others. Since then, they’ve asked us to provide musicians for particular UNESCO/UN-driven initiatives. Recently, for example, some of our musicians were asked to play at Berlin’s Foreign Office, where Ban Ki-Moon announced an international scientific advisory board to address solutions for poverty and hunger in the world. We’re happy to do things like that because it’s part of our duties. It’s a way to bring the existence of this orchestra to an ever-growing community.’

The Orchestra comes together to play on special occasions – would they ever consider holding down a residency?

‘The Orchestra plays at occasion-driven events, which reflects the reason why we did it the first time (the 50th anniversary of the founding of the UN). It’s not generally available in normal orchestral terms for what would be called a ‘residency’.

‘Having said that, we can turn the preparation for each event into a wonderful learning opportunity for students, for them to see players playing together after four days as if they’d been together all their lives. In a way, each of our events is a little residency in itself. We open all our rehearsals to students and young people – tomorrow’s players are today’s students!  And it is a vital part of our credo and constitution to give a chance to at least 10 outstanding young professional orchestral musicians to join and learn each time from their more experienced senior colleagues from around the world’.

Charles’ desire to increase the Orchestra’s accessibility is just another way in which he strives to continue the vision described by Solti.

‘We constantly look on ways in which we can mount more significant concerts in more places, and ways in which we can bring this vision to people that have never heard of us. To continue Solti’s vision, you have to firstly believe in it, and secondly make the time to organise (and, in Gergiev’s case, conduct) these concerts. And with the help of our media partners, UNITEL/Classica and enlightened TV broadcasters such as the BBC, we make a point of audiovisually documenting every one of the concerts, many of which are now available on DVD and YouTube.’ (See below…) 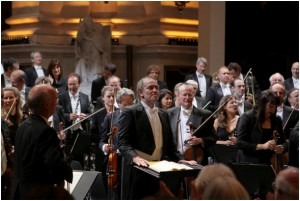 Valery Gergiev and members of the World Orchestra for Peace 2009 acknowledge the applause at the conclusion of the concert in the church of St Peter and St Paul, Krakow, marking the 70th anniversary
of the start of WW2

Let’s take a moment to be cynical here. In this era, where war and conflict still tear apart communities across the world, can music really make a difference? For Charles, it’s about the example that music sets – an example that remains solid regardless of who is playing it, or what or where it’s being played.

‘Music is genuinely a universal currency. The ability to listen and respond to musical and rhythmic impulses is something that people are born with, this ability to be affected by what they hear. I believe that music can bring different communities together, because we get all these musicians together from different countries and show people that listening to each other and enjoying the music we make encourages people to think about communicating with each other more, and in a more peaceful way.

‘There are many and complex reasons why people go to war.  But music has this strange ability to touch the souls and hearts of its listeners and all I’m trying to do here is to move people towards the alternative to war, which is taking an example from what we do – that might ultimately translate to gestures of peace. I’ve worked in the cultural world all my life, so when this chance came along to harness the universality of music, I jumped at it.’

So, what does the future hold for the World Orchestra for Peace?

‘I’m investigating what will be our first visit to Australia and New Zealand to mark the centenary of ANZAC day, the public holiday commemorating those Australian and New Zealand soldiers killed in Gallipoli in the First World War. The fundraising is the hardest part of my job. Getting the events together is the fun bit!  Once you’ve got the events in place you need to find enlightened people who understand the cause and align themselves with financial and other support for us. The future for us is to bring this unique idea and message to as many different countries as possible.’

For more information about the World Orchestra for Peace and its recordings, see below:

2014 – Mahler 6 at the UNESCO Concert for Peace at the BBC Proms, London