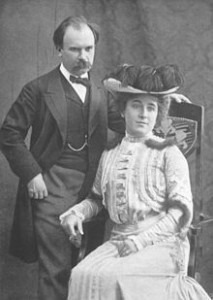 Emperor Napoleon I of France was small in stature, reaching a mere 157 centimeters in height. It is commonly assumed that he compensated for his lack of height by aggressively seeking out power, war and conquest. “Short man syndrome,” which apparently can also affect short woman, is a psychological phenomenon that describes people driven by a perceived handicap to overcompensate in other aspects of their lives. Being short, according to some recent studies, increased “reports of negative feelings, such as being incompetent, dislikeable or inferior.” To compensate, Napoleon went to war against Europe, and Eugen d’Albert got started on his third wife!

Eugen d’Albert was portly and stood a mere 150 centimeters in height. He was described as “a little, round-shouldered man, with diminutive legs and a shrewd face, who looked as if nature had intended him to wear a large white apron and be a chemist and druggist.” Yet Franz Liszt described him as “an extraordinary pianist…I know of no more gifted or dazzling talent than his.” Professional accolades aside, his personal life was rather messy. After he divorced the actress Louise Salingré and the pianist Teresa Carreño, he turned to the singer Hermine Finck. Hermina had sung the role of the witch in the premiere of Engelbert Humperdinck’s opera Hänsel and Gretel, and d’Albert first met her in 1893. Not taking any hostages, d’Albert married Hermine in 1895. Not everybody delighted in Eugen’s third taking. Brahms was invited to the ceremony but he declined the invitation with the remark, “d’Albert surely will marry again, I’ll just skip his third wife.” 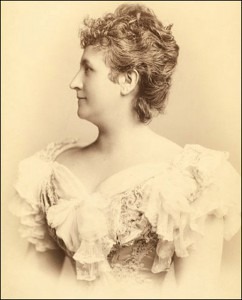 Seemingly, his marriage to Hermine was reasonably happy for a substantial period of time. She fully supported his pianistic career, and was happy to create a peaceful homestead for her husband. She dutifully accompanied him on his concert tours, and he thanked her by composing over 60 songs for her. Hermine also appeared as the leading lady in his opera Gernot, and in 1904 the couple embarks on a concert tour to the United States. Once again, the journey to the new world turns into a complete disaster. Reporters were highly critical of Eugen’s playing, and he in turn accused them of having been bought to produce ghastly reviews. Threats of lawsuits prompted the couple to flee America, and to overcome this intolerable lack of professional respect Eugen started an affair with Ida Fulda. Most curiously, Eugen’s son Wolfgang was also deeply in love with the widow of the poet Ludwig Fulda, who had described her as a “beautiful landscape but with a seriously bad climate.”

From the very beginning, Hermine had been aware of the affair, but remained silent. In order to get rid of his rival—his own son Wolfgang—Eugen divorced Hermine and married Ida. Needless to say, the relationship between father and son suffered somewhat! Ida now became Eugen’s muse, and hosted glamorous dinner parties with d’Albert entertaining their guests at the piano. But Eugen still wanted to be recognized as a composer, which contributed to a number of heated arguments. During one such argument, Ida threatened to jump from a moving train. Encouraged by her husband, she leaps out and breaks her leg; the breakup of the marriage was not far behind. Ex-wife Hermine helped him to fill out the divorce papers, but instead of returning to her, he marries the youthful Frederike Jauner. Highly supportive of his career as a pianist and conductor, Frederike bears him two children and becomes a homemaker.

During the tumultuous times of World War I, d’Albert is in constant demand as a performer and unable to spend much time with wife and kids. They manage to hold things together for a while, but eventually Eugen tells her that he had finally met the woman of his dreams. So he files for divorce and marries Hilda Fels. That marriage, however, is quickly in trouble as Eugen falls under the spell of the mystic Margit Labouchere. Ever since his marriage to Ida, Eugen had been versed in the secrets of the occult. Madame Labouchere, after visiting the world of spirits tells Eugen that he has to write an opera and become her lover. His sixth wife Hilda is not amused, and the mystic Margit eventually dissipates into the ether. German law, at that time, limited the number of legally valid divorces to 6. So Eugen has to travel to Riga in order to seek a divorce from Hilda, and to be allowed to marry his last mistress, the maid Virginia Zanetti. Before Eugen can take wife No. 7, however, he dies of heart failure in 1932. Napoleon would surely have been proud of him!