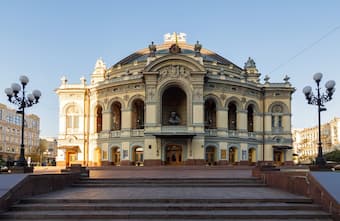 Freedom Square in the heart of Kharkiv, Ukraine houses the State Academic Opera and Ballet Theater, Kharkiv Philharmonic concert hall, and numerous universities and government buildings. On March 1st, the square, the second largest city square in Europe, became the target of a Russian missile leaving the area in rubble.

Ukraine boasts several distinguished theaters and opera houses, which are all in jeopardy.

The National Opera of Ukraine in Kyiv is one of the oldest musical theaters in Ukraine. Named after the famous poet Taras Shevchenko, it was founded in 1856, and designed by German-Russian architect, Victor Schröter. The building features a beautiful neo-renaissance exterior, its distinguished and elegant façade decorated with stucco molding. Above the main entrance architectural designs depict gryphons that are holding the lyre, a symbol of music. And the interior, which features classical style and modern Viennese designs, is exquisite. Tens of thousands of ballet and opera performances have taken place here, and despite World War II, the war for independence, and the rise and fall of the Ukrainian Republic, they have continued. Its repertoire offers performances in several languages including Ukrainian, Russian, Italian and French. 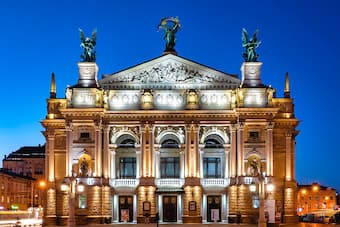 The Lviv State Academic Theatre of Opera and Ballet is another spectacular gem. One can see why the theater is often compared to the Viennese opera house with its beautiful neo-Renaissance design. The opera house is named after the Ukrainian operatic diva Solomiya Krushelnytska whose marvelous voice graced concert halls from Poland to Russia, and from Egypt to Argentina. Once the great Italian opera composer Giacomo Puccini entrusted her with the lead role in his opera Madame Butterfly her success led to superstar status. 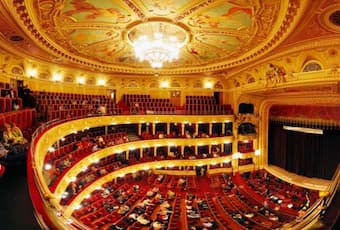 Unusually enough, the opera house is built on top of the Polta River, which flows beneath the stage. Polish architect Zygmunt Gorgolewski, who also designed the Kaiser Wilhelm Bridge in Berlin, the Gemäldegalerie in Dresden, and the Vienna State Opera, proposed the radical idea. The plan was approved but once it was completed in 1900, the Opera House started to sink! Fortunately, the edifice eventually settled. The interior of the hall is magnificent too, and enriches the gorgeous performances of the orchestra, world-class opera soloists, a choir, and a ballet troupe. 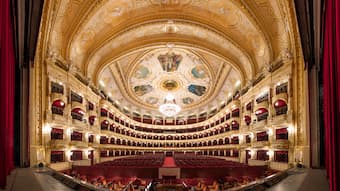 The 19th-century Odessa National Academic Theater of Opera and Ballet, the oldest theater in Ukraine, another superb venue, consists of an architectural mix of Italian Renaissance, Viennese Baroque style, and classical Rococo. It is listed as one of five significant monuments in Eastern Europe by Forbes. Before you even hear a note, inside, the dramatic staircases, massive chandeliers, vaulted ceilings, and awe-inspiring frescoes and sculptures are a feast for the eyes.
The building went through trials and tribulations. A fire was but one challenge. In 1955, it could no longer be denied that the edifice was sagging. Siliconization would be necessary. Liquid glass, to the tune of 6 million liters, was dispensed through several holes drilled into the foundation, day and night, while performances carried on. Although the process held for several decades, the building continued to sink. In the 1990s a full restoration was necessary to shore up the building, to preserve the wonderful acoustics, and to introduce new technologies, such as modern lighting and heating. Today the opera, ballet, orchestra, and chorus perform all the classics as well as contemporary masterworks. 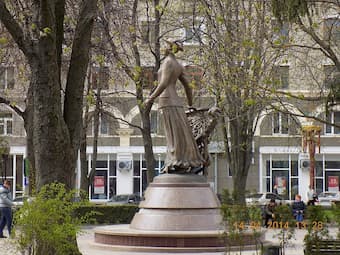 These and other precious venues are imperiled. In February, The Museum of Local History of Ivankiv was decimated. A few weeks later the Drama Theater of Mariupol, where women and children cowered—with its outstanding red roof, white pillars, and tiled courtyard—was shattered by an airstrike.

The J. Paul Getty trust condemned these actions. Their president and chief executive James Cuno, in remarks made after these incidents said, “Cultural heritage has the power to unite us and is critical for achieving peace. It is also too often the target of war, another way to destroy and overtake a society by erasing its memory.”

The great halls, as we learned during the pandemic, are silent without its musicians. But Ukrainian musicians are trying not to remain silent in the face of displacement, and the tumult and horror of war. Many artists have joined as soldiers; others have been playing in bomb shelters, among ruins, and on social media to shine a light on their plight.

One of the most poignant symbols of defiance, The Cellist of Sarajevo, highlights the bravery of Vedran Smailović, a cellist. During the war in Bosnia and Herzegovina in the 1990s, after he witnessed 22 people killed by a bomb while they stood in a bread line, played his cello in the very spot for 22 days. The story is now immortalized in a book and has inspired a mournful solo cello composition Lament (The Cellist of Sarajevo) Op. 12 by the English pianist and composer David Wilde. Cellist Yo Yo Ma has both performed and recorded the work. Listen to this music accompanied by still photos of the cellist of Sarajevo.

Yo Yo Ma Plays The Cellist of Sarajevo

No doubt inspired by these events, a Ukrainian cellist recently played the poignant opening to the Bach Solo Suite in C minor in the rubble of Kharkiv.

Denys Karachevtsev Plays from the Bach Suite in C minor

Other musicians are reaching out to the world’s audiences. Violinist Vera Lytovchenko, “decided to play this song in my partly damaged flat. Hope to return there after our victory. Still stay in Kharkiv.” Illustrator Oksana Drachkovska, has used her talents to preserve and inspire hope. “For all people who lost their houses during this war… your homes are actually inside you wherever you are now…” And a pianist, in her bombed apartment, plays Chopin, bidding farewell to her piano.

Pianist bids farewell to her piano in bombed apartment with Chopin

I can’t help thinking of Leonard Bernstein, whose words reminds us, “This will be our reply to violence: to make music more intensely, more beautifully, more devotedly that ever before.”