Blog
Soloists I Have Known: Yo Yo Ma, André Watts, Sara Davis (once David) Buechner
by Janet Horvath December 28th, 2013

“Are soloists nice?” audiences ask. “Not all of them,” I’d reply cautiously. (One doesn’t want to taint the concert experience, after all.) Some soloists can be self-centered; others reserved. There are soloists who stand out as genuine, warm and wonderful people.

I had a huge crush on André Watts, the legendary pianist. He was handsome, brilliant and charming. André was born in Nuremberg, Germany, the son of a Hungarian mother, (who also played the piano, like my Hungarian mother) and an African American soldier — a U.S. army non-commissioned officer. André’s mother started him on the piano but he didn’t like to practice. His mother told him grand stories about Franz Liszt enticing André with Liszt’s dazzling music and red-hot personality. André was hooked. In 1963 Leonard Bernstein chose the16-year-old André to play with the New York Philharmonic on their Young People’s Concerts. Bernstein had “flipped” when he first heard him play. Two weeks later, Glenn Gould was scheduled to perform Liszt. As fate would have it, at the last minute Gould became ill. Bernstein asked André to substitute for Gould. Once again André performed the Liszt with the Philharmonic, this time in a subscription concert. His incandescent playing catapulted him to stardom.

André was a frequent soloist with the Minnesota Orchestra. I blushed when he spoke to me. One year, he came around the piano to my seat in the orchestra and presented me with a tiny wrapped box. As I opened it my heart thumped loudly. (I was certain he could hear it.) Inside was a broche— a silver delicately carved turtle. I stammered my gratitude, “Oh! How lovely. …why… err…I mean… this is so kind…um… for me?” I was so overwhelmed that after the rehearsal I went out and bought one of my favorite books, which I presented to André after the series of performances.

The next time André returned to Minneapolis to perform with us, he brought another gift. These exchanges of books and little gifts, which so swept me off my feet when we were both much younger, became our little ritual and continued year after year.

As associate principal cello, I was lucky enough to have the opportunity to perform chamber music with soloists who came to play with our orchestra. One year it was with André — the formidable Dmitri Shostakovich Piano Trio No.2 in E minor for violin, cello and piano written in 1944 during World War II. It begins with an incredibly difficult passage in the cello, all harmonics (whistling sounds) and a demonic, maniacal “dance of death” movement. André was a prince through the rehearsals and performance, collaborating respectfully although he was so famous and accomplished. The concert was sold out — all 2800 seats. No problem. André’s cool rubbed off on me. Decades after my first encounter with André I still have a crush on him. 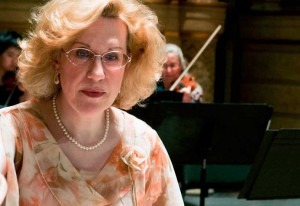 Pianist David Buechner was the Gold Medal winner of the 1984 Gina Bachauer International Piano Competition and the bronze medalist of the 1986 Tchaikovsky International Piano Competition. It was a pleasure to collaborate with him in the Beethoven Sonata in A Op. 69 for cello and piano, the Rachmaninoff Sonata and the Brahms Sonata in F major. Then he disappeared for several years. One day, when the Minnesota Orchestra was on a long tedious bus ride on tour, someone shrieked, “David Buechner is now Sara Davis. He is a she!” The details were laid out at length in the New York Times Sunday magazine that weekend in the early years of 2000. We hastily crowded around to read the article. Many of us were astounded at her bravery — some were stunned into silence — others kept their opinions to themselves… David couldn’t afford to have surgery in the U.S. so with his heart in his mouth he journeyed to Asia for the deed. His Thai surgeon, “turned out to be a butcher and disfigured me so badly I wound up spending a couple of extra weeks in the Bangkok hospital with swelling and bleeding, doped up on morphine.” After corrective surgery back home Sara learned that the change had profound implications to her career. It took a decade before Sara spoke publicly about being shunned. In February of 2013, in another New York Times article, she said, “In the United States, once I came out as Sara, I couldn’t get bookings with the top orchestras anymore, nor would any university employ me. In Canada, the University of British Columbia in Vancouver hired me for a piano professorship in 2003, and in 2008 I earned tenure.”

The Minnesota Orchestra too, shied away from hiring Sara. After several years had gone by, finally she was on the roster. As the week approached, I nervously prepared what I would say. I certainly wanted to be natural with my old friend. As I made my way down the long hallway toward the stage entrance for the first rehearsal that week, Sara was coming toward me. “Janet,” she said, “ My goodness you’ve changed!” 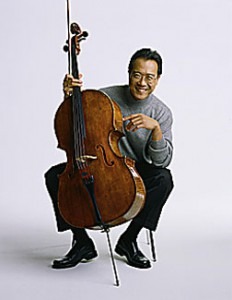 Yo Yo Ma needs no introduction. His cello playing is legend. Each time Yo Yo came to perform with us I marveled at his ability to make everyone feel like he genuinely had time to speak with each of us individually. We often “talked cello” and he was more than willing to let us try his Stradivarius cello. The year my book Playing (Less) Hurt was released, I thought I would offer a copy to him as a gift. As I proffered it, Yo Yo pulled his wallet out and offered me a $50. bill. I shook my head refusing to take it, but Yo Yo was adamant, “ I know what has gone into creating this book which will help so many musicians.”

Usually after performing a concerto the soloist will relax, change their clothes, maybe have a bite to eat and wait for the concert to finish. Not Yo Yo. He enjoyed going onstage for the second half of the concert, still dressed in his tails, to sit and play the symphony with us. The tittering from the audience would start several minutes into the symphony when they finally noticed Yo Yo sitting unobtrusively at the back of the cello section.

Another time, during Sommerfest — our annual summer festival, we presented a cello extravaganza featuring Yo Yo Ma and our cello section. What could be better than a dozen cellists playing together? We performed several works for cello ensemble including the gorgeous Popper Requiem, for three cellos and piano, an arrangement of a couple of Beatle tunes for twelve cellos, and the Bachianas Brasileiras No. 5 for soprano and eight cellos, by the Brazilian composer Heitor Villa-Lobos. Yo Yo gracious as always, insisted. I should play the lovely solo of the first cello part. He would play the fourth part.

Today Yo Yo is a cultural ambassador who travels the world over performing with musicians of every genre, believing in the power of music to break down the cultural and religious barriers that seem to plague our world. If anyone can do it — Yo Yo can.