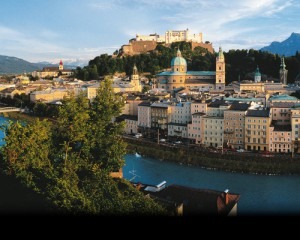 The War to end all Wars—as World War I was colloquially known—put a brutal stop to most cultural events on the European continent. Although some determined aficionados managed to ignore the devastation caused by this all-encompassing conflict, most theaters, opera houses and music festivals were silenced by heavy artillery.

Although Europe exhaustedly stumbled towards an uneasy peace in 1918, the general sense of gloom and pessimism was palatable. After all, the old ways of doing things had irrevocably been replaced by a secularized, industrialized and alienated modern world. In hopes of recapturing the glorious cultural and musical aspects of the “good old days,” organizers revived a number of music festivals that had been cancelled at the outbreak of World War I. Among them was the Salzburg Festival; its revival championed by the poet and dramatist Hugo von Hofmannsthal, the composer Richard Strauss, the stage designer Alfred Roller, the conductor Franz Schalk, and the theater director Max Reinhardt. The founders hoped that through culture Austria could regain a sense of purpose after the devastation caused by the war.

Hofmannsthal wrote, “Organizing a musical and theatrical festival in Salzburg means reviving ancient living traditions in a new way; it means: doing things in a new way in ancient, meaningful and exquisite places, what was always done there.” And so for the next 15 years, the Salzburg festival became a magnet for leading intellectuals and artists in Europe. It officially opened on 22 August 1920 with Reinhardt’s performance of Hofmannsthal’s Jedermann (Everybody) an adaptation of a 15th-century English morality play. Richard Strauss conducted the first operatic production, Mozart’s Don Giovanni, in 1922, and newly constructed venues saw productions of plays by Gozzi and Goldoni. Richard Strauss premiered his revised version of Die ägyptische Helena in 1933, and
Arturo Toscanini and Bruno Walter joined the festival between 1934 and 1937. Boyd Neel even premiered Benjamin Britten’s Variations on a Theme of Frank Bridge in 1937. The Austrian novelist, playwright, journalist and biographer Stefan Zweig saw the Salzburg Festival as a world attraction “as it were the Olympic Games of Art in the modern era, in which all nations competed to present their best achievements. Kings and princes, American millionaires and film stars, music enthusiasts, artists, writers and snobs all met in Salzburg.” 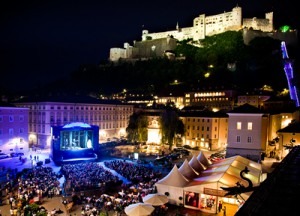 With the annexation of Austria by Nazi Germany in 1938, darker times once again descended on the festival. Jewish artists were prohibited from performing in Salzburg, and Hofmannsthal’s Jedermann disappeared from the program. Toscanini resigned in protest, and Max Reinhardt and Georg Solti had to emigrate abroad. The festival became a wheel in the propaganda machine of the Nazis, and the famed conductor Karl Böhm claimed that his entire family would have been sent to the concentration camp if he had tried to resign. Clemens Krauss, who apparently sought Nazi Party membership in 1933, made his name in Salzburg, as did Wilhelm Furtwängler, who publically denounced the anti-Semitic policies of the Nazis. And let’s not forget Richard Strauss, who was fiercely proud of his lack of involvement in politics, and somewhat naively, could never come to terms with the notion that his music and the political situation of his days should be connected in any way, shape or form.

While the political affiliations of Krauss, Furtwängler and Richard Strauss is certainly subject for debate there was never any doubt that Salzburg-born Herbert von Karajan, who took over artistic leadership of the festival after World War II, was a “true believer.” After all, Karajan joined the Nazi party twice, early on in Austria when it was illegal, and then again after the annexation. “While his egotism and ambition were no secret, his political convictions were vague enough to allow the post-war musical world to look the other way.” Karajan ruled the Salzburg festival for decades, and alongside his duties with the Berlin Philharmonic and the Vienna State Opera, became one of the most-recorded musicians in the world. When Karajan died in 1989, the festival, which had become a private haven for his jet-set crowd, was on the verge of collapsing. It took the avant-garde efforts of Belgian arts administrator Gerard Mortier and his successors to revive the festival once more. Their manifesto of “reclaiming old works for contemporary audiences through boldly reconceived presentations, and of fostering new works” continues to attract large audiences over the five-week duration of the annual festival. Some things never seem to change, however. If you visit the festival this year don’t be worried if you experience some hostility or condescension from the local population, it’s not personal. In a long-standing tradition, Salzburg residents consider foreigners to be highly suspicious, and they have long objected to this kind of cultural tourism. Too bad Mozart was born there, but hey, they didn’t like him either!

Benjamin Britten: Variations on a Theme of Frank Bridge