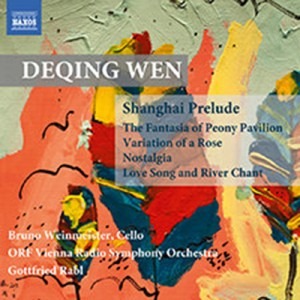 From WEN, Deqing: Shanghai Prelude / The Fantasia of Peony Pavilion / Variation of a Rose (2016)

Deeply influenced by Chinese traditional arts and philosophy, Deqing Wen composes in a style that is vivid, emotive and accessible. In the Cello Concerto Shanghai Prelude he blends traditional Chinese music with elements of European Baroque style, while The Fantasia of Peony Pavilion draws on Kunqu, one of China’s oldest forms of opera. The graceful melancholy of Nostalgia is balanced by the intensity and power of Love Song and River Chant.