In Tune Arts
Variations on a Subject in Poetry, Music and Art
by Ursula Rehn Wolfman November 15th, 2015

In 1894, the French writer and poet Stéphane Mallarmé gave a lecture in Oxford and Cambridge, England, about the relationship between music and literature, in which he alluded to the origin of the artistic creation — the ‘trace’ — whether black notation on a white paper, or the black notes on a white sheet of music. According to Mallarmé, writing and performing music are similar in that they constitute a journey where the result is not a known but an imagined concept, since the interpretation — such as in his poem ‘Un Coup de Dés Jamais N’Abolira le Hasard’ (‘A Throw of the Dice Never Abolishes Chance’) and in many of his other poems and sonnets — itself is open ended.

In this poem, words are a constellation spread over many pages; they appear without punctuation, some in capital letters, some in italics, as alliterations, repetitions and rhymes spreading from one page across the next, leaving a trace on the paper as if a remembrance of something past, but still present. It is precisely on that point that Mallarmé mentions the relationship of music and poetry (“Variations sur un Sujet” (pp. 384 , Oeuvres Complètes, Pléiade): «Au cours, seulement, du morceau, à travers des voiles feints, ceux encore quant à nous-mêmes, un sujet se dégage de leur successive stagnance amassée et dissoute avec art –« (Only in the course of the piece, through faint veils, those again perceived by us, a subject is released from their successive stagnancy, accumulated and dissolved by art”). Music and poetry are both journeys – outside of logic — purely in the realm of imagination. 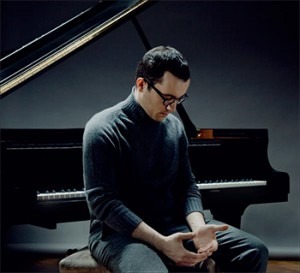 Igor Levit
Bach: Goldberg Variations, BWV 988
The young Russian-German pianist, Igor Levit, who has just released his third CD – an extraordinary, monumental effort of Bach’s ‘Goldberg Variations’ (Aria with 30 Variations, BWV 588), Beethoven’s ‘Diabelli Variations’ (33 Variations on a Waltz by Anton Diabelli, op. 120) and Rzewski’s ‘The People United Will Never Be Defeated’ (36 Variations on “El Pueblo Unido Jamás Será Vencido” – connects the Baroque, Classical/Romantic and the Modern eras. In the CD liner notes, Levit speaks of these variations as his favorite musical form (p. 25-26) in that they are like travel books or journeys with a personal beginning, but changing the protagonist/pianist in the process throughout the journey as it continues to its end.

For Levit, again in his own words, “Nirgends habe ich mehr das Gefühl, etwas unmittelbar im ‘Miteinander’ zu erleben” (Nowhere do I have the sensation, to experience something in the immediacy, in the ‘togetherness’ – my translation); this phrase was also cited by the music critic Marco Frei in his article ‘Der Klang der Veränderung’ (The sound of Transformation) in the Neue Züricher Zeitung of October 2, 2015. Frei also correctly connects Levit’s understanding of the ‘Variations’ to Mallarmé’s concept of ‘possible multiple interpretations’ of art, and its relationship to music — where according to Frei, the artwork created in a spontaneous moment already foreshadows the musical creations of John Cage, Pierre Boulez and Karlheinz Stockhausen – where chance and the art of the moment are open-ended and are now the basis of artistic creation. 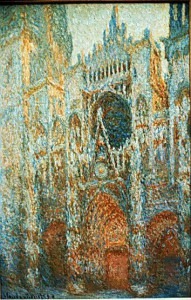 Igor Levit
Beethoven: 33 Variations in C Major on a Waltz by Diabelli, Op. 120, “Diabelli Variations”
Edouard Manet, who painted Mallarmé’ portrait (above), and Claude Monet were very much part of the artistic circle around Stéphane Mallarmé. Monet in particular started the concept of paintings in ‘series’ around the time Mallarmé published his musings on art and music. Between 1892 and 1893, in addition to the series of Haystacks and Poplars, Monet produced more than thirty paintings of the Rouen Cathedral. He had rented a room facing the west façade of the Cathedral, painting several canvasses at the same time with the light and atmosphere changing throughout the day and year. He then subsequently reworked all of them in his studio in Giverny in 1894. 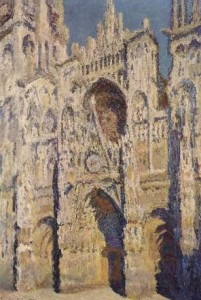 Monet was of course less interested in the exact representation of the Cathedral façade, but rather more in the effect of light, shadow and the distinctly different character of the time of day and the season. The importance of the difference and variation of the subject matter, where the object, the Cathedral façade seems to dissolve, the viewer abandons the recognition and reality of the object for the realm of pure imagination. The very same concept would later be taken up not just in the paintings of the American Abstract Expressionist painters, such as Jackson Pollock, Robert Motherwell and Mark Rothko, but also in the contemporary music compositions of John Cage, John Adams and many others.

Igor Levit
Rzewski : The People United will never be Defeated