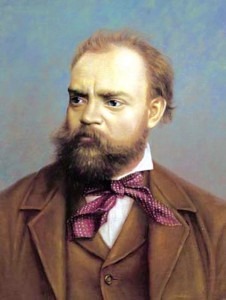 Well-known for his nine symphonies, Antonin Dvořák was one of the first composers to infuse his music with the folk idioms of his native land, enchanting us with Czech, Moravian and other Slavic melodies. He wrote an enormous number of works in other forms including operas, choral works, concertii (including the famous Cello Concerto) and chamber music that are among my favorites to perform. I’d like to introduce you to three of his works you may not be familiar with.

Serenade, Op. 44
The first time I played Dvořák’s Wind Serenade in D minor for woodwinds, cello and double bass was at the Marlboro Music Festival. I was a young twenty-something and thrilled to be chosen to perform with more seasoned players. I have never forgotten the performances of this infectious lyrical piece.

In 1878 Dvořák had the opportunity to attend a performance of Mozart’s Serenade in B-flat in Vienna. Mozart’s work was so inspiring that Dvořák wrote his own version with the same instrumentation in only two weeks—for two oboes, two clarinets, two bassoons, three horns, cello and bass and an “ad libitum” or optional contra bassoon part. Such an unusual instrument was hard to find in those days.

It’s a remarkable work full of soaring Czech melodies and inventive rhythms. Don’t be fooled by the standard four-movement form all classically named—Moderato, Minuetto, Andante con moto and Finale Allegro molto. The first movement is a grand stately march with lovely melodies in the oboes and delightful duets in the clarinets and the second movement, an enchanting minuette with a quicker contrasting trio, features the clarinets in an infectious Czech folk style. It would be difficult to imagine a lovelier andante—a lyrical nocturne that suddenly turns dramatic when the horns interject. The last movement Finale a Dance furioso, is reminiscent of a polka. A flurry of fast passagework in the cello is quite a challenge to play. I remember hanging on to my seat as my bow and fingers flew over the fingerboard, not to underestimate the fast tonguing in the clarinet. The reiteration of the march in the middle of this last movement makes it a perfect arc as Dvořák propels us to a flashy finish.

Johannes Brahms, a champion of Dvořák’s music, had recommended that his publisher Simrock take on Dvořák and in1879, Brahms wrote to his friend, the famed violinist Joseph Joachim, “Take a look at Dvorák’s Serenade for Wind Instruments; I hope you will enjoy it as much as I do…It would be difficult to discover a finer, more refreshing impression of really abundant and charming creative talent.” That’s an endorsement! 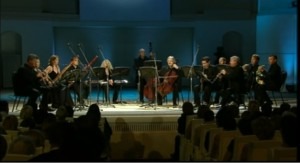 The Dvořák Piano Quintet No. 2 in A major for Piano and Strings composed in 1887 is wonderful to play. How could I not love this work? It opens with a sublime cello solo, which then explodes into passionate string interjections. Like Brahms’ Piano Quintet, the work is dramatic, deep and orchestral in its tone colors and scope. Also in a traditional four-movement form and with Czech folk idioms, the work is full of contrasts—soaring melodies and passions of the first movement are juxtaposed with the Dumka movement this time led by a thoughtful, melancholy viola. The Scherzo Furiant is a fast Bohemian folk dance during which the cello and viola alternate a rhythmic pizzicato to accompany the phrases of the first violin, with an exquisite gentle middle section, ending with an aggressive flourish. The Finale a nimble and spirited movement includes a fugue and a tender chorale-like section, before a quickening tempo races to the finish—a masterpiece and so satisfying to perform.

String Quintet in G Major, Op. 77, B. 49
Last but not least of my favorites, although less known, is the String Quintet in G—two violins, viola, cello, and double bass. Dedicated “To my Nation,” it was written in 1875 and then revised in 1888. Originally in five movements the Intermezzo was renamed Nocturne—an intimate, sweet movement—and published as a stand-alone piece for string orchestra. Sometimes performers will reinstate this alluring movement, although it makes for a long performance.

The work has gorgeous lilting melodies. The first movement labeled “con fuoco”– to be played with fire, makes exceptionally virtuosic demands of the players such as the violin part in the opening to the finale. The second movement scherzo features a luscious tune.

Musicians in a string quintet are individuals each responsible for their share of the glory and musical dialogue—especially evident in the heart-rending, eloquent andante movement where each instrument is featured. In a piano quintet sometimes the piano, a dominant force, necessitates interchanges between all the strings with the piano.

The sweeping journey through every emotion in the Quintet for Strings, although requiring multiple resources from the musicians to play, is rewarding for both the performers and the audience members. All of these works are bound to brighten your day.