One of the delights of the 2003 movie Les Triplettes de Belleville was the nightclub scene where the triplets, who had been stars of the French music halls in the 1930s, take the stage in their very old age with new instruments including a newspaper, a refrigerator, and a vacuum cleaner.

Fifty years earlier, the English composer Malcolm Arnold put similar instruments on stage in his Grand Grand Festival Overture, which included three vacuum cleaners, a floor polisher, and 4 rifles. The four rifles are used (around 06:24) to kill off the four distinctly non-musical instruments.

The work was written for the first of three original Hoffnung concerts. Gerard Hoffnung (1925-1959) was a noted artist and musician. His cartoons on musical ideas poked fun at conductors and instrumentalists alike, including a player on the serpent, an archaic woodwind instrument, being consumed by same. 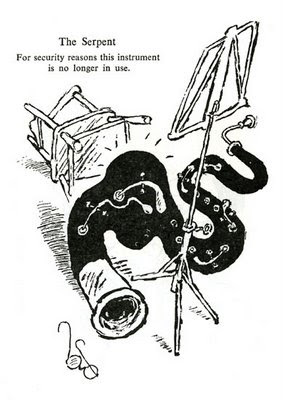 Another image shows a trombonist’s dream of doing in a bad conductor, using the tools at hand. 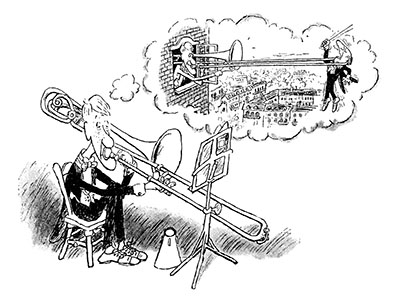 A pianist gets his unruly instrument under control. 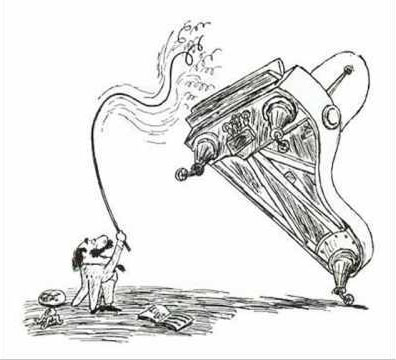 And the evolution of timpani. 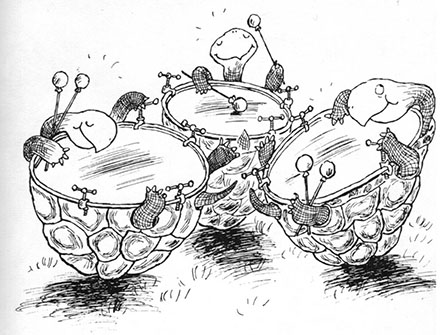 For musicians, his drawings resonated with insider knowledge (Hoffnung himself played the tuba, itself an amusing instrument). For those not in music, the imagery could be appreciated. Hoffnung’s works appeared in humour magazines such as Punch, as book illustrations, and in six small collections of his works, published from 1953 to 1959.

In 1956, Hoffnung started his ‘Hoffnung Music Festival,’ with specially commissioned works from the leading composers of this day, poking fun at classical music, including a revision of the 2nd movement of Haydn’s Surprise Symphony to make it even more surprising, and Arnold’s A Grand, Grand Overture. Hoffnung’s wife recalled that one of the problems with the work was finding instruments in the right key: the vacuum cleaners had to be in B flat and the floor polisher in G. Arnold and Hoffnung ‘spent days trying to find just the right ones.’


The Hoffnung Music Festival appeared again in 1958 with performances by the Dolmetsch Ensemble, Dame Edith Evans, and concluded with Let’s Fake an Opera, or The Tales of Hoffnung, with characters including Beckmesser, Don Giovanni, Brünnhilde, Manrico, Otello, Mélisande, and others.

The 1961 Festival, entitled the Hoffnung Astronautical Music Festival, was a tribute to Hoffnung, who had died at age 34 two years earlier. This Festival included St. William Walton conducting his oratorio Belshazzar’s Feast, reduced down to one note (the word “Slain!” shouted by the chorus).

These are very much works of British humour, which rely on the audience having the knowledge to appreciate a work such as Franz Reizenstein’s Concerto Popolare, aka, A Piano Concerto to end all Piano Concertos, where we have the true idea of the concerto of soloist versus orchestra. The orchestra, in this case, is playing Tchaikovsky’s Piano Concerto No. 1, whereas the pianist is playing the Grieg Piano Concerto. In the following musical fracas, other works are dragged in such as the themes from Gershwin’s Rhapsody in Blue, Addinsell’s Warsaw Concerto, and the music hall favourite, Roll Out the Barrel, delivered in a heroic style. A piano concerto to end all piano concertos, indeed!