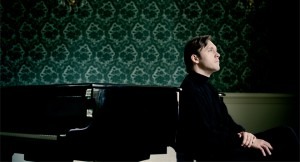 Born in Düsseldorf to a musical family, pianist Florian Uhlig is yet in every way resembling an English gentleman. Although he was impressed by pianist Pascal Devoyon’s beauty of tone that led him to Paris to play for him, it was in London that he developed his artistry at two major institutions: Royal College of Music with Bernard Roberts, then gaining his Masters and Doctorate at the Royal Academy of Music. It was also in London that he made his orchestral debut at the Barbican Centre in 1997. Since then, he has been performing internationally, in Berlin, New York, Paris, Cape Town and now in Hong Kong playing the Schumann Piano Concerto with the Hong Kong Sinfonietta. Fate seems to shower favor upon him, but on his website, it says that he “has never been interested in easy successes…he seeks out the quirky or eccentric pieces…gains an overall view of a totality… unveils a broad panorama of spiritual feeing.” These reflect in his two massive recording projects: the entire piano works of Schumann and Ravel.

Schumann: Humoreske in B-Flat Major, Op. 20
Knowing that you are recording all Schumann’s work on 15 CDs, have you discovered anything in this journey which would deepen our understanding of the composer? How is the Schumann piano concerto in relation to his entire piano work?

I am now half-way through my Schumann project and the 8 CDs that have been released so far already include a number of very interesting pieces that have never been recorded before. In recent years, Schumann research has moved on considerably and has unveiled several fascinating new discoveries. Most of these works relate to the bigger cycles which Schumann wrote and they reflect in very vivid terms how Schumann worked as a creative mind. The other aspect of my Schumann journey is that his piano oeuvre has some recurrent themes, such as Schumann’s fascination with literature, with certain musical genres and musical ideas. This is reflected by our decision to group the repertoire into specific themes as opposed to a chronological compilation.

I have recorded the Schumann Piano Concerto on a separate disc, along with all the other works he has written for piano and orchestra. Of course, the Concerto is in many ways a culmination of the composer’s fascination with the piano as an instrument.

Do you have a favourite recording of the Schumann piano concerto?

There are numerous wonderful recordings of the Piano Concerto and I deeply admire a lot of them. But ultimately, as a musician you must articulate your own voice and your own artistic conviction.

You are a devoted chamber musician and a vocal accompanist. Would Schumann’s works be your favorite too?

I love Schumann’s chamber works and his song cycles and I guess that over the past years I have performed most of them in concert. It’s just brilliant that the chamber music repertoire is so huge. Certainly, I don’t just live on a diet of Schumann, but I also adore the chamber works of Mozart, Beethoven, Schubert, Brahms and many others.

Ravel: Daphnis et Chloe, Fragments symphoniques (version for piano)
Apart from Schumann, I know that you have embarked on another recording project – the complete piano works of Ravel. They are very different composers. What draws you to explore the world of Ravel?

Since my childhood I have had a soft spot for Ravel: the colours, the atmosphere, the exotic flavour, the virtuosity. Yes, Ravel is very different from Schumann, yet there are some curious analogies. Both composers conjure up the sound palette of a symphonic orchestra in their piano works. And both composers were fascinated by the world of myths and legends.

You were born in Dusseldorf, but you chose London as your home. As a city, how has London enriched your musical life?

I have been fortunate to live in London for the past twenty years. It’s such an exciting place with so much going on! I remember my student days, listening to the most fabulous concerts. These days, I live in London and also in Dresden, where I have recently been appointed Professor of Piano.

How did you fall in love with music and the piano? Because of your musical family?

When I grew up as a child, there was always music in the house. My father was a fairly competent amateur pianist and my mother loved listening to LPs with opera and song repertoire.

Apart from being a pianist, you are also the Artistic Director of the Johannesburg International Mozart Festival since 2008. Would you tell us more about this festival?

The Johannesburg International Mozart Festival is an annual two-week music festival in South Africa which features symphony, choral, chamber and solo concerts, along with a number of interdisciplinary projects, workshops, master-classes and a vocal scholarship scheme for young South African talents with a disadvantaged background. Its vision is to bring together and unite artistic outputs from diverse South African and international contexts, reflecting the broad-minded nature of Mozart’s creative genius.

It is mentioned on your website that music is your “real life”. Apart from music, do you have other passion in life?

Music is pretty much a full-time job! One of my non-music passions is traveling. I love to explore new cities and countries and try to extend my stay after a concert when I go somewhere interesting.