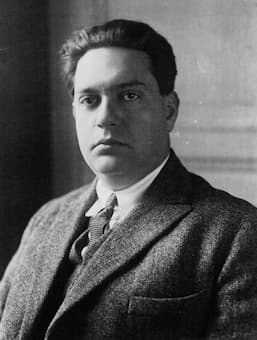 Written in an unusual small format, and with only three movements, the Chamber Symphonies of Darius Milhaud (1892-1974) are perfect pocket symphonies.

Begun while he was in Brazil in 1917, while he was serving as the secretary to Paul Claudel, the eminent poet and dramatist who was servicing as French ambassador to Brazil. The Little Symphonies, also known as the Chamber Symphonies or Symphonie de chambre, each are one movement but have internal divisions creating, in actuality, three movements of about 1 minute each in duration. The works employ polytonalism, use Latin American rhythms and folk-loric melodies, and, after he returned to Europe, the later symphonies show the influences of the Neo-Baroque style of the 1920s. The final symphony includes a part for wordless chorus.

The first Chamber Symphony (1917) evokes the ideas of Spring – light melodies with each ‘movement’ being dominated by a different melody: first the harp, then the oboe, and finally, the clarinet. The piece doesn’t end as much as abruptly vanish.


The second Chamber Symphony (1918) opens with ‘Joyeux’ (Joyous) and with a polyrhythm of duple meter in the strings and triple meter in the woodwinds. The second movement, ‘Calme,’ focuses on the flute. The third movement, also ‘Joyeux,’ has a repeating phrase in the flute, string parts that are rhythmically driven, and a woodwind section that play polytonal melodies. The violin supplies birdcalls, to support the name of the symphony: Pastorale.


Chamber Symphony No. 3, written in 1921 in Paris, is entitled Serenade. There’s still a Brazilian influence in this movement and just like the first two Chamber Symphonies, the third movement carries elements of the first movement. The first movement grows in complexity, with each new instrument that enters adding to the dissonance and polytonality. What starts simple becomes more harmonically interesting. The second movement, ‘Calme,’ alternates notes between the flute and the clarinet to make a flowing, wiggling line. The third movement returns to the action of the first movement and gradually builds to the final chord.


Critics of the fourth Chamber Symphony, written in 1921 in Vienna, alternate between ‘irritating’ and ‘comic.’ Ostinato plays an important role in the first two movements and the last movement goes as far to include a fugal section. The second movement Choral, marked Assez lent, offers the strongest contrast so far to the first movement. The double basses are the principal instruments of this movement.


The Fifth Chamber Symphony, written in 1922, was commissioned by Italian Radio and had its debut in Paris in 1923. The work is dedicated to the singer Marya Freund, who sang in the debut of Schoenberg’s Pierre Lunaire, conducted by Milhaud. There’s more than a little influence of Schoenberg’s Pierrot sound in the opening. This work is the first which has a more ensemble sound rather than a small orchestra sound. Intervals such as minor seconds and thirds alternate with major seconds and thirds to give us a very chromatic sound.


The last Chamber Symphony, written in 1923 in New York, has the most unusual instrumentation: oboe and cello (noted for their voice-like sounds) and SATB wordless chorus. Jazz had an influence on this work as well as the usual polytonality. As a contrast to the other works, the movements are Slow – Fast – Slow. The writing, particularly in the second movement, deliberately blurs the difference between the cello and the bass voice. It was during this trip to the US that Milhaud heard ‘authentic jazz’ for the first time, when he visited Harlem, and it had a significant influence on his musical writing.


These little symphonies are wonderful small works that both show off the Slow-Fast-Slow construction of your typical symphony (without the Minuet/Scherzo movement) and permitted Milhaud to experiment with the new sounds he was hearing – Brazilian influences are in the first Chamber symphonies and, increasingly, that radical new style: jazz.