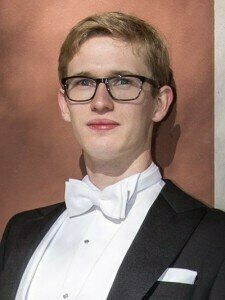 I speak to young German conductor Thomas Guggeis on the eve of his first day as First Kappellmeister at Staatsoper Stuttgart. He is in Berlin for some concerts before moving to Stuttgart, having recently finished studying in the former with Daniel Barenboim, culminating in assisting him in Staatsoper Berlin’s 2016/17 season. ‘I’ve had a great opportunity here in Berlin with Barenboim. I’ve had a chance to get to know some of the most interesting artistic personalities who come here,’ he recalls.

Thomas was originally a pianist, but entered the Munich conservatory to study conducting. After that he spent a short while in Milan before moving to Berlin, taking up a repetiteur post at the Berlin Staatsoper. As is tricky with many young conductors, it took Thomas time to build up experience, especially in his early days with Barenboim.

‘It’s been a very special relationship, both artistically and personally, although I had to fight for our relationship. In the beginning, I was just an ordinary pianist at the state opera. I would just be playing, but I wanted to stick to him as much as possible, and ask him as many questions as I could.

‘I asked him about conducting, and he said it would be difficult at a house like this for me with such little experience. Still, he gave me a rehearsal with the orchestra and he was happy, and so this is how we developed. I learnt so much from him in artistic terms, but also in human terms. He became a musical father to me. He’s such a generous and noble man, alongside being a musical genius. It was an honour to have someone like him as your boss!’

Despite Thomas’ new post in Stuttgart being full time, there remains some flexibility so that Thomas can undertake other projects. Managing a portfolio of engagements as a conductor can be tricky, especially with opera, as the end of a run of one particular show can spill over into the initial rehearsals for the next. This happened to Thomas when he was engaged for a production of Salomé at the Staatsoper Berlin whilst finishing up a Pelléas and Mélisande at the Theater an der Wien.

‘It was a lot of back and forth, and was sometimes troublesome, although I’ve never had the feeling that I’m on the edge. It would be a pity if I already felt that, as I feel like I’m just starting off!’

Even today, Thomas came from Munich, where the day began with a 4.30am wake up call so as to make it to Berlin in time for his concerts.

‘There are things in the upcoming season where I’ll have to take flights every day. Fortunately for me, I can recharge my batteries very easily and quickly, which is useful for my job. I can sleep almost anywhere, but it’s still the part of the travelling that nobody likes.’

When he has some rare downtime, Thomas makes time to take a run, and cook a fresh meal. ‘I like the fresh air, and I like running, because it gives me a chance to connect with nature. Sadly I often don’t have time to cook at the right point of the day. Very often if you have a rehearsal or performance you can’t cook at the right time, but I enjoy it when I have the time.’

Dancing is also a major hobby for Thomas, anything from salsa to simply going clubbing with friends (when time allows). ‘I move my hands and shoulders so much, but I often forget about the hips!’