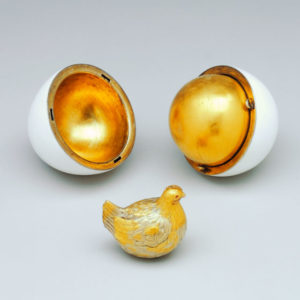 In pre-Christian celebrations of spring, the egg was seen as a symbol of rebirth. Symbolizing the resurrection of Jesus, it was subsequently defined as an Easter egg by early Christians, “likening the egg symbol to the tomb from which Christ arose.” Maybe you did know that the Protestant Reformer Martin Luther started the custom of the Easter egg hunt, with children searching for hidden colored eggs, and ever since the 17th century it was the Easter Bunny who brought Easter eggs. In Imperial Russia, however, it was Peter Carl Fabergé and his Jewelers who delivered the most precious Easter eggs ever. Over a period of almost twenty-five years, Fabergé created as many as 69 glamour eggs, of which 57 still survive today. 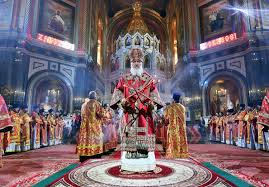 The series began in 1885 when Emperor Alexander III, through the intermediary of his uncle, Grand Duke Vladimir, commissioned an Easter egg from Fabergé as an Easter present for his wife, Empress Maria Feodorovna. The “Hen Egg” featured an opaque white enameled outer shell, opening to reveal a matt yellow gold yolk. This in turn contained an enameled chased gold hen that once held a replica of the Imperial Crown with a precious ruby pendant egg within, but these two elements have been lost. 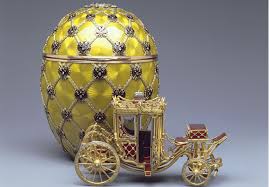 The Fabergé series of Easter eggs is inextricably linked to the glory and eventual tragic fate of the Romanov family. The “Coronation Egg” of 1897 is perhaps Fabergé’s most iconic creation. Emperor Nicholas II presented it to his wife, Empress Alexandra Feodorovna, as a memento of her entry into Moscow on May 26th, day of their Coronation in the Uspensky Cathedral. Its outer shell is made of multi-colored gold, embellished with translucent yellow guilloché enamel and black enamel double-headed eagles set with diamonds, a design recalling the heavy Cloth of Gold robe she wore at the ceremony. The egg opens to reveal a surprise in the form of a diamond-set enameled gold miniature replica of the original 18th century carriage by Buckendahl which once contained an emerald drop, later replaced by a yellow briolette diamond, with both elements lost today. It’s not just glitz and glory, as the Fabergé series of Easter eggs also link to an extended tradition of Easter celebrations in the Russian Orthodox Church. In 1988, the church marked the 1,000-year anniversary of their baptisms into Christianity, and with it, a glorious tradition of vocal art music. 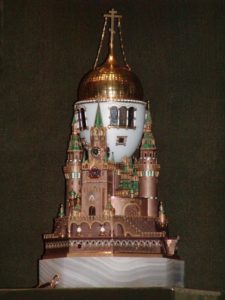 Located on the north side of Cathedral Square of the Moscow Kremlin in Russia, the Cathedral of the Dormition—also known as Uspenski Cathedral—is the mother church of Muscovite Russia. The burial place for most of the Moscow Metropolitans and Patriarchs of the Russian Orthodox Church, it also saw the Coronation of all Russian monarchs between 1547 and 1896. And that included Tsar Nicholas II, for whom the “Uspenski Cathedral Egg” or the “Moscow Kremlin Egg” was fashioned in 1906. The egg commemorates the return to Moscow of the royal couple Nicholas II and Alexandra Fyodorovna in 1903. But since the royal couple had been avoiding the capital because of riots that caused massive loss of live, the egg was only presented at Easter 1906. The cathedral dome made from white opalescent enamel can be removed, and allows for a view of a remarkably crafted interior of the church, including carpets, enameled icons and a high altar on an oval glass plate. The tower bears the coat of arms of the Russian Empire and the coat of arms of Moscow, but the surprise in this egg is music. The base of the egg contains a music box that plays the favorite Easter hymn of Nicholas II, the Cherubic Hymn No. 7 by Dmitry Bortniansky. 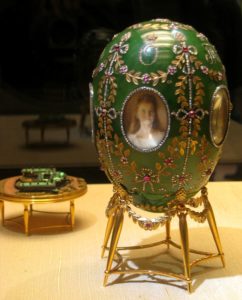 For over 500 years, a group of performers known as the “Tsar’s Singing Clerics” have played a leading role in the nurturing of the Great Russian choral tradition. In 1893, Pyotr Ilyich Tchaikovsky wrote to his patron Nadezhda von Meck. “There is nothing like entering a church on a Saturday, standing in the semi-darkness with the scent of incense wafting through the air, lost in deep contemplation searching for an answer to those perennial questions, wherefore, when, whither and why?” And while the choral tradition of the Russian Orthodox Church will surely survive for another millennium, the reign of the Romanov’s came to a horrible end. The “Alexander Palace Egg” was made in 1908 and featured five miniature watercolor portraits of the children of Nicholas II and Empress Alexandra; Olga, Tatiana, Maria, Anastasia and the Tsarevitch Alexei. Each portrait featured a monogrammed diamond initial of the child’s first name, and visible only from the inside of the egg, is the date of birth. The surprise is a detailed replica of Alexander Palace, the favorite residence of the Russian Imperial family. Happy Easter!