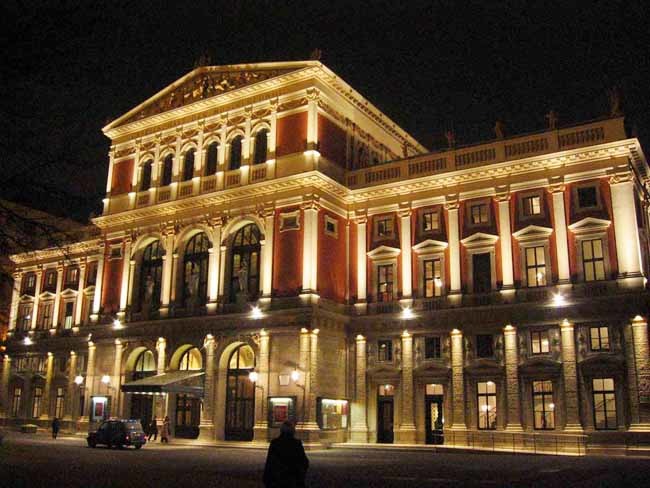 Viennese audiences, throughout the establishment of their city as a cultural and musical center, have not only been known for their artistic expertise, but also for their fickleness. A deep-seated reliance on musical and cultural traditions informed much of the artistic discourse, and the divisions between “serious” and “light” classical music are endlessly debated. And Vienna, as the self-proclaimed city of music could not do without a dedicated opera house. Urban planners in the 19th century made sweeping changes to the city Wolfgang Amadeus Mozart knew just fifty years earlier. Emperor Franz Josef started to knock down the old city walls in 1857, replacing it with a grand boulevard that encircles the historical center of Vienna. In the prevalent artistic and architectural style of Historicism, which reproduces and combines different historic building styles, structures that stylistically exemplified their intended function began to populate the Vienna Ringstraße. The Parliament, for example, was built in the Hellenistic style of ancient Greece to reference the democratic beginnings of Classical Greece. The University was modeled after buildings from the Italian Renaissance, long considered the heyday of European science and art, and City Hall rose in the neo-Gothic style that represented civic autonomy experienced in Flanders. Work on the opera house, built in neo-Renaissance style following plans by August Sicard von Sicardsburg and Eduard van der Nüll, commenced in 1861. When the level of the Ringstraße was raised by a meter in front of the opera house during construction, Viennese quickly called the new building a “sunken crate.” Less charitable descriptions likened it to “a digesting elephant,” and various sarcastic verses criticizing the design and style made the rounds.

At some point, even the emperor was overheard making critical comments with the result that van der Nüll committed suicide, and 10 weeks later Sicardsburg suffered a fatal heart attack. As such, neither architect saw the completion of the building in 1869. The Vienna Court Opera (Wiener Hofoper) officially opened with a performance of Mozart’s Don Giovanni on 25 May 1869. From the very beginning, the opera house was closely linked to the Vienna Philharmonic, whose members are still recruited from its orchestra. A long list of eminent artists, singers, set and costume designers, and conductors have worked in one of the busiest opera houses in the world, producing 50 to 60 operas per year and ten ballet productions in approximately 300 performances. Gustav Mahler, for example, assumed directorship of the Imperial Opera in 1897 — one of the world’s most prestigious musical post — and stayed for ten years. His association with the supreme stage and costume designer Alfred Roller spawned more than 20 celebrated productions, and his administrative involvement restored financial stability to the organization. With the fall of the Austro-Hungarian Empire, the opera was officially renamed Wiener Staatsoper (Vienna State Opera) in the 1920’s. 30 June 1944 saw a performance of Wagner’s Götterdämmerung, (Twilight of the Gods). Almost prophetic, this would be the last performance in the old building as American bombers set the opera house ablaze with incendiary bombs.

Ten years later, the building had been restored to its original designs, and reopened with a performance of Beethoven’s Fidelio on 5 November 1955. Since then, a number of visionary directors and conductors have been associated with the Vienna State Opera. Among them Herbert von Karajan — who insisted on performing operas exclusively in their original language — Lorin Maazel, Claudio Abbado, Seiji Ozawa and currently Franz Welser-Möst. The Vienna State Opera has seen hundreds of world premiers, and continues to alternate the staple operatic repertories with contemporary theatrical expressions, that also include an emphasis on children’s productions.