I am for the first time in my life living with Handel. I lived with Bach earlier this year, when I was involved in performances of his St John Passion at Clare College, Cambridge and with the Aurora Orchestra in London. The narrative power, rich musical and textual symbolism and stylistic range of that work (the choruses range from violent turba shouts to the final lullaby, Ruht Wohl) is remarkable. The depth of meaning of the Passion texts is reflected by Bach in extraordinary precision and detail; my solo aria in our performance, Betrache, Meine Seel, follows an extraordinary, twisted sequence of harmonies responding with intense dissonance and resolution to each word of aria’s text. The consequence of this is that Bach’s music, especially his vocal music, tends to permeate your mind while you are rehearsing and performing them. The seemingly all-encompassing sphere of reference of Bach’s great choral works results, if you’re not careful, in you seeing the whole world through the prism of Bach’s musical universe. 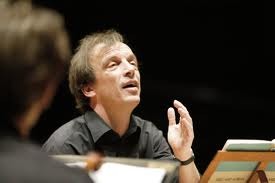 So I’m interested to see whether the same happens with Handel, as I write this after the first concert of a European tour of his choral music with the Clare College Choir and European Union Baroque Orchestra, Of course it won’t – there’s a profound difference in musical language between the two men. There’s often a literal one too. Bach set German Lutheran texts, whereas Handel, born in Germany, is one of the greatest setters of the English language we have. That difference in language is perhaps a gateway into their differing achievements. Much of Bach’s music is bound up with the ideas and beliefs of the Lutheran church, designed to look towards heaven and to transcend our earthly lives. Bach’s low-profile personal situation amongst the poor and needy of Leipzig is relevant here too. But Handel was a composer for the opera house and the royal occasion. He portrayed and celebrated the characters of his operas as humans independent of their religious attitudes – indeed their setting in ancient times serves to remove the religious question altogether. Above all his music is profoundly celebratory, humanist and down to earth. 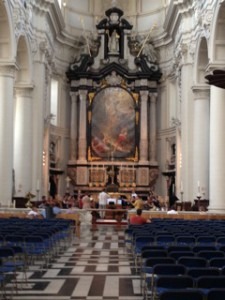 The differences between Handel and Bach have led today to a degree of polarisation of the two men, with many people coming down on the side of Bach. We celebrate his profundity and density (both musical and metaphysical) and he has retrospectively become a central figure in a musical tradition that seeks visionary figures and transcendent art. This is tough on Handel. I have only lived with him for a few weeks, but I have already been thrilled by Handel’s ear for sonority and his sheer physical enjoyment in creating sound. We might usefully compare here the opening chorus of the St John Passion, Herr, unser Herrscher and the opening of Handel’s famous Zadok the Priest, one of the anthems he wrote for the coronation of George II of England. Bach’s orchestral introduction is multi-layered, a series of piquant wind dissonances riding on churning strings and a driving bass line. It leads to a lengthy chorus, lasting eight minutes or so, in rich counterpoint. Handel’s introduction is much simpler. A basic violin figure remains essentially unchanged over a long harmonic sequence. After a number of bars and a turn to the minor, the harmony shifts back to D major and leads into one of Handel’s most famous and memorable inspirations, a massed chorus singing the opening line of the anthem as one voice. What they sing looks unremarkable on the page: ‘Zadok the priest and Nathan the prophet anointed Solomon king.’ The harmony isn’t particularly special on paper, just simple chords and cadences. But the sheer sound is overwhelming, the gesture perfectly tuned to express human celebration and grandeur. This opening is a great example of Handel’s musical achievement, in which the physical action of playing and singing becomes the substance of the music itself. It is visceral, powerfully related to our daily experience and totally unforgettable.

So I am thrilled to be spending this time with Handel. As performers of Bach, we are often left feeling that we have merely attempted to summit the mountain. We are in some sense condemned to fail; we can only get so close. But Handel, it seems, is fundamentally inclusive music – we are all invited to join the party. So I have a new ambition to spread the good news of Handel’s music. We all know Bach’s great choral works – the Passions, the Christmas Oratorio and the Mass in B Minor. But Handel’s odes, anthems and oratorios have as much to offer us, and celebrate humanity not through the medium of the Protestant faith but with immediacy, simplicity and joy.