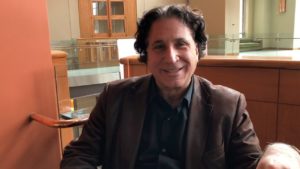 The problem with Passion oratorios is that so many of them were written not from a sense of awe, but a sense of getting back at the bad guys. Many of the usual Passion texts have an anti-Semitic flavour that loses the beauty of the music in the anger of the words.

For composer Richard Danielpour, it was hearing Bach’s St. Matthew Passion that was his confirmation that music was his life’s work. Every day started with Bach and he became the backbone of Danielpour’s musical life. This is not to say that he was happy with all the sentiments in Bach’s very Lutheran text. Danielpour also looked, in vain, for the voices of the women that were around Jesus. Although the Blessed Virgin Mary and Mary Magdalene figured in the Gospel narratives, by the 17th century, they had largely disappeared from the male-dominated picture. 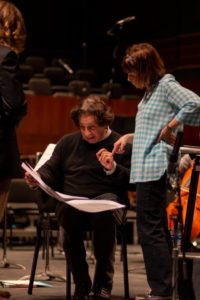 Danielpour and Falletta in rehearsal

To meet his desire for a new view of the Passion, Danielpour created The Passion of Yeshua. As can be seen from the title, the text of the Passion is in English and Hebrew. The Hebrew texts come from the Jewish scriptures, the Tanakh, while the English comes from the four Gospels. He used 2 different English sources: the Revised Standard Version, the Anglican revision of the King James Bible; and David. H. Stern’s Complete Jewish Bible. Stern’s translation uses Hebrew where necessary, so even in the English texts, there’s still a reminder of the source. The Hebrew texts are generally sung by the choir or by the two female soloists as messianic prophecies. As Danielpour indicates, the Hebrew text is symbolic of the past and the English is ‘an archetype of the present.’ He also wants the listener to remember that the story is placed in the first century through the language.

Great works have a long gestation – decades after he heard Bach’s Passion at age 17, Danielpour started his own work. He said that it was the text that was hardest to assemble. It took some 4 months to put the text together and only 36 days to do the first draft of the music. He said it’s gone through 6 rewrites since then. Original + 6 rewrites = 7 and 7 is a key number for the work. There are 7 chorus numbers (4 small, 3 large), 7 times the Marys sing either together or separately, 7 scenes in each part, and there are 7 roles. The roles of Kefa (Peter) and Pilate are sung by the same tenor; in the live performance, Peter crossed behind the stage from one side of the conductor to the other to signify the character change.

The chorus on the first performances and on the recent Naxos recording are the UCLA Chamber Singers who joined the Buffalo Philharmonic Chorus. When Danielpour was a visiting professor at UCLA, he enlisted the Chamber Singers to perform some of the draft choruses. They also performed in the first two performances, in July 2018 in Oregon, with JoAnn Falletta conducting, and in UCLA in December 2018. The Naxos recording was made in April 2019 in Buffalo and the UCLA Chamber Singers, most of whom are music majors, supplemented the largely amateur Buffalo Philharmonic Chorus. 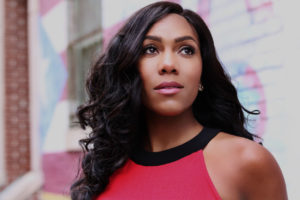 The piece is a full-sized oratorio, lasting some 2 hours. It’s important to listen to the whole work at a sitting so that the overarching narrative has time to show its trajectory. The Prologue is dramatic from the start (and another of the 7s is that the Chorus begins on measure 7). The Prologue sets the scene, asking the question from Isaiah 53: ‘Who has believed what we have heard? / And to whom has the arm of the LORD been revealed?’ This chorus, essentially, reveals the answer to the question posed by the entire oratorio: Who is this man?


One of the most striking passages occurs at the end of the first Part. Yeshua has been betrayed by Y’hudah (Judah) in Gethsemane and captured by the guards. Then follows an interlude that contrasts two texts: ‘All we like sheep have gone astray’ from Isaiah 53, and ‘The stone which the builders rejected has become the [cornerstone]’ from Psalm 118. This doesn’t sound like Handel’s ‘All We Like Sheep’ from Messiah. This is a strong and defiant statement by the Chorus that they have gone the way they want, and they know it. The middle section with the Psalm setting is the few remaining rational people understanding their part. The musical setting is amazing. It sounds very Bernstein-esque and rhythm-driven when Psalm 118 starts and creates a clear counterpart to the chanted declaration by the ‘sheep.’ The driving rhythm comes from the Israeli hora dances used so often by Bernstein, such as in the opening of Chichester Psalms.

Danielpour noted that setting Hebrew here, rather than the more flaccid English, made the language sharper. Instead of the wandering lost sheep of Handel’s setting, these sheep are more like the idolatry of the Golden Calf. The chant setting makes this more powerful as well. 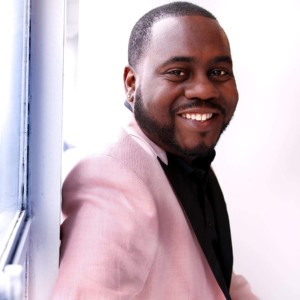 The ‘Ecce Homo’ scene, when Pilate brings out the prisoners and asks who they will free and who will be crucified is a critical section of the second part. The Chorus cries out again and again ‘Let him be crucified!’. The Narrator declares ‘Yeshua of Natzeret, is one of our brothers!!!’ in the only words contributed by Danielpour to the narrative. The Narrator has changed from the outside observer to a participant in the action. This declaration is followed by a chant by the two Marys, which is then echoes by the chorus, noting that ‘it is for their sins that he suffers.’ Each line of the Marys’ chant ends with a strong G major/minor chord with percussion. Pilate frees Bar-Abba and hands over Yeshua for crucifixion.


The end of the story arc comes with the death of Yeshua, crying out ‘Eli, Eli, l’mah sh’vaktani? [My God, My God, why have you forsaken me?]’ The chorus repeats this and is changed, closing by reciting a prayer from the Kaddish, the traditional Jewish rite for the dead. The anger is gone, the push for action is gone; with the death of Yeshua, the chorus and the world are transformed.


The work closes with an Epilogue that matches the opening Prologue. It is a setting of Isaiah 42, which is the beginning of Isaiah’s Messianic prophecies. As much as the Prologue was the closing of the prophecies and is in the past tense, Isaiah 42 in the Epilogue tells us of the future.


Danielpour’s Passion oratorio returns us to earlier centuries, where these large-form pieces were instructional as much as being pure music. The texts they present may not be as familiar as in Bach or Handel’s time, but the emotions they present are everlasting. For Danielpour, the place where God resides is in music itself….’with music, no one is excluded, and all are invited.’