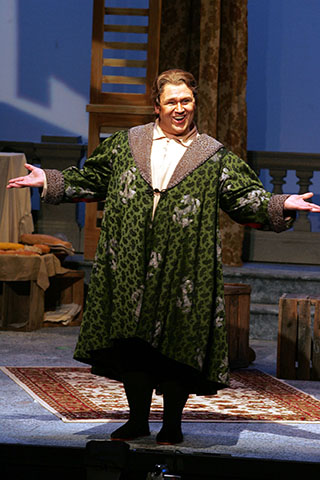 In a sense, at the end of the opera, we’ve received closure for the story at hand (they marry, they die, they get their revenge, etc.) but sometimes there’s a large story that we are locked out of. Modern composers can put their own views on those stories and one of them is a continuation of the story of the clever Gianni Schicchi.

Composer Michael Ching’s Buoso’s Ghost takes up the story at the end of Puccini’s opera. At the end of Gianni Schicchi, the clever Gianni has escaped with the late Buoso Donati’s goods by rewriting his will on his ‘deathbed’ in his own name. In Buoso’s Ghost, we start the minute Puccini’s opera has ended. Gianni sends off the lovers Lauretta and Rinuccio to do their wedding shopping while he stays to face the disappointed heirs. To his horror, Gianni discovers that the food that the ‘grieving’ relatives have been bringing has been poisoned and that they, in fact, killed the old man off. 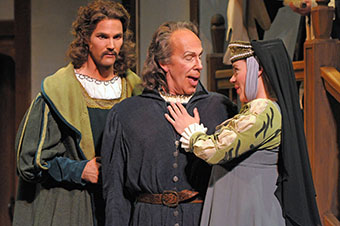 A magistrate arrives to try the case. The relatives again have to pretend their sorrow and each tries to bribe Gianni on the side to push the blame on someone else. Gianni defends himself in front of the magistrate and, falling on the corpse, ‘finds’ a suicide note – Buoso wasn’t murdered…he committed suicide. What luck. What luck that Gianni placed that note in the corpse’s cloths just after Lauretta left…! Gianni wins again. The relatives again plan a murder but now Gianni, behind the body of Buoso, makes him seem to rise as a ghost and scares everyone from the house. The opera ends just as Gianni Schicchi did: with Gianni appealing to the audience to approve his actions, or, in this case to approve the ‘upstart composer’ who wrote this sequel. One review noted: “The score subtly introduces brief tongue-in-cheek quotations from other works, ranging from Mozart to Sondheim, plus one unmistakable interjection of Shostakovich.”

Composer Michael Ching wrote this opera in 1997 and it was given its premiere at Opera Memphis. Since then, it’s been given by a number of American companies and, as an English one-act finishing of the story, let us see how Gianni Schicchi will always win!