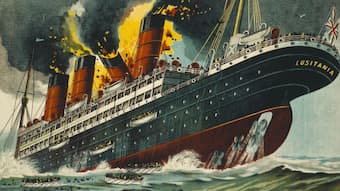 The British ocean liner RMS Lusitania was sunk by a German U-Boat on 7 May 1915 off the coast of Ireland, leaving over 1,100 dead. The US had not yet entered WWI but was an active part of the supply chain to England. Germany had declared at that seas around the United Kingdom was a war zone and its US embassy had placed advertisements in the newspapers warning passengers of the danger of sailing on the Lusitania.

The Germans held that the Lusitania was not just a passenger vessel but should be considered a naval vessel because of the war munitions and ammunition she carried to supply England. The British government maintained at the time that there were no munitions on the Lusitania, although in 1982 they dropped this story to say that ammunition in wreck should be regarded as highly dangerous to anyone seeking to salvage the ship. 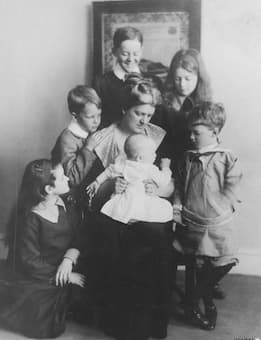 Among those who died on the ship were the Crompton family of Philadelphia. Mr. Paul Crompton, the Vice President of Surpass Leather Company in Philadelphia, was a British businessman shipping ‘sheepskin accoutrements’ for the British Army on the Lusitania. One historian believes that these ‘sheepskins’ were actually armaments. He was traveling with his entire family, including wife Gladys, his 6 children (Stephen, 17; Alberta, 12; Catherine, 10; Romilly, 9; John, 6, and Peter, 9 months) and their nurse, Dorothy Allen, age 26.

Passengers knew the children well because of their activities around the ship. Their neighbour in the next stateroom moved because of the noise. Alberta and Catherine were ‘helping’ one of the crewmen paint a lifeboat when there was an accident with the paint-can and Albert was suddenly wearing a grey dress instead of her white one. The children and their nurse may have been the children who rushed into the B deck foyer, shouting “Torpedo!” just before the ship was hit. The last view of the children was with their father, who was helping them into life vests. The whole family was lost and only the bodies of Stephen, John, and Peter were recovered. 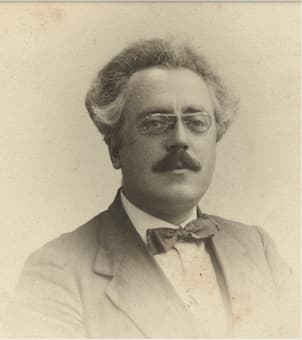 British composer Frank Bridge was deeply opposed to WWI. A deeply convicted pacifist, he wrote pieces that reflected his beliefs. He also made a sharp change in his music, and used a more radical harmony as he sought to express his thoughts about the war. This change in style caused him to lose his audience and the critics, who thought he was ‘uglifying’ his music.

One important work he wrote in response to the war was Lament, written in 1915. It’s the dedication, however, to (Catherine, aged 9 ‘Lusitania’ 1915) that gives us the context. The only Catherine, aged 9, on the Lusitania was Catherine Crompton. It’s not known if Bridge knew the family or chose a child as his focus for the work.

Bridge wrote the work in a single day, 14 June 1915, and it was given its premiere at the Proms that summer. Originally written for string orchestra, it also has been arranged for piano solo.


The work is one of quiet mourning. It’s a statement of grief, full of melancholy and despair, but keeps back that spark of anger that would take it out of its introspective mood. Bridge’s pacifism and opposition to the war has given us a work that takes us out of the battlefield and brings us to the memory of what was lost that day at sea.