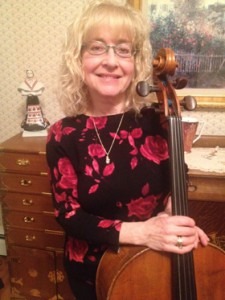 Why I Love the Cello

Because it is me. Because it is the closest sound to the human voice. Because I can engulf it with my body in an embrace. Because when I tell people that I play the cello they say, “ Oh! I love the cello. It makes me cry.”

The demeanor of the cello is complex and varied. The room resonates with the low baritone counterpoint notes; sears the soul with amorous melodies. The cello can dazzle with virtuosic flights of fancy in its uppermost range. The cello soothes and inspires; stirs and arouses.

Our playing position is quite natural. We don’t have to contort our bodies to play the cello — not like poor violinists who must unnaturally twist their left arms, and on top of that, hold the instrument under their chins.

Other performers have cello envy. They even steal our repertoire. It is not unusual to hear the Bach Solo Cello Suites on — heaven forbid — the trombone, or The Swan, from the Carnival of the Animals by Camille Saint-Saens on the double bass. (Shouldn’t they just stick to The Elephant?) The piccolo player must play shrill high passages; some people snicker at the bassoon players — leaving so bassoon?
If your electronic device goes off you will be forced to play the bassoon!

The violists are typically relegated to play the oomm- pah-pah of a piece of music and other boring accompaniment figures. Rarely does a composer throw them a bone — a short melody once in a while. Viola players are the brunt of jokes too — How is lightning like a violist’s fingers? Neither one strikes in the same place twice.

And pity the pianist who has to learn a vast repertoire of music, performing entirely from memory.

Don’t get me wrong; the cello is difficult to play. Small-handed players must avoid some of the reaches on the instrument. We don’t have any frets to rely on and believe me, we fret about some of the long leaps we must make to what we call the “nose-bleed” territory — the uppermost range of the cello, off the ebony fingerboard and into the rosin. We spend countless hours practicing the vaults, timing them perfectly, and often travelling many inches down the fingerboard.

Our bows have to be placed just right to produce a sound that is both lovely and which projects. The cello, since it’s mellow, can easily be swallowed up by the surrounding sonorities. We have to perfect the sensitive balance in our arm — just the right flexibility and weight to be heard, but not so much force as to squelch the sound.

I am sometimes jealous of pianists who have all their notes right in front of them, in tune — lucky them — and the sound resonates as soon as they press a key!

Like many cellists, I have trouble transporting the instrument in its bulky protective case. It acts like a sail in the wind. I fly into the air like Mary Poppins — hanging on for dear life. If I slip while walking with the precious instrument my instinctive reaction is to save the cello by pulling it onto my body, never mind breaking an arm.

I wish I had a quarter for all the times someone has said to me, “That thing is bigger than you are!”
“Don’tcha wish you played the flute?”
“What do you have in there: a dead body?”
And don’t get me started about taking it through airports. Despite buying a full fare seat for the cello, there is always a bitter dispute about taking it on the airplane. (“But it doesn’t eat much!” I’ll insist.)

My other complaints include regret that I am so petite, at barely five feet tall. It takes a lot of physical energy and strength to play the cello.
I disagree with composers who might treat the cello as a bass or percussion instrument. I grumble when I am in need of a master’s degree in calculus to figure out a rhythm in a contemporary work.

When I have a solo, I will work on it for months and like a carefully cooked dinner that a teenager will inhale in no time flat, the performance is over in twenty minutes. It causes a common disease among performers: “after-concert-let-down.” The music has disappeared into the spheres. I wonder if it was any good after all. No matter how hard I try, I cannot recreate in my mind that glorious feeling — the lush cello sound and being at one with the instrument while recreating the masterpiece as the composer intended. My husband tries not to lose his patience as I ask repeatedly,” but really, how did it sound?”

I take a few much-needed days off and then I feel rusty. I start practicing for my next performance, perhaps a new piece. It sounds to my ears as if I am a beginner. Plagued by self-doubt, I am so hard on myself that I am never certain that what I am doing is good enough. At night, I pull the sheets over my head and bemoan the fact that I am not really doing anything meaningful. Then the dreams start. I am invariably late for a performance and cannot get to the concert hall. I encounter all kinds of hazards, even shipwrecks, only to discover that when I do finally arrive, I am either at the wrong venue in the wrong city or I am to appear as the flute soloist.

Despite playing for decades, the butterflies in my stomach are back in force for the upcoming performance. It doesn’t help at all when my friends say, “oh but you always play beautifully.”

Eventually I do get over my melancholy and my nerves. I discipline myself to work on the new piece, going over and over passages with a metronome, evaluating each phrase, oftentimes changing fingerings and bowings to get the desired effect. Music is of course about passion, enthusiasm, talent and darn hard work.

I am galvanized. I remind myself that making music is a privilege. I play some of the greatest masterpieces ever created by mankind. In our society there is precious little time for contemplation or elation, commemoration or celebration. Through my cello, I can wordlessly touch people of all cultures and creeds.

But wait! Shouldn’t I be practicing? I hurry back into my studio to practice more so that during the next concert, the audience members will once again envy the cellist.