Composers Anecdotes
The Hungarians and Chinese are related
— The Pentatonic Scale
by Janet Horvath December 8th, 2013 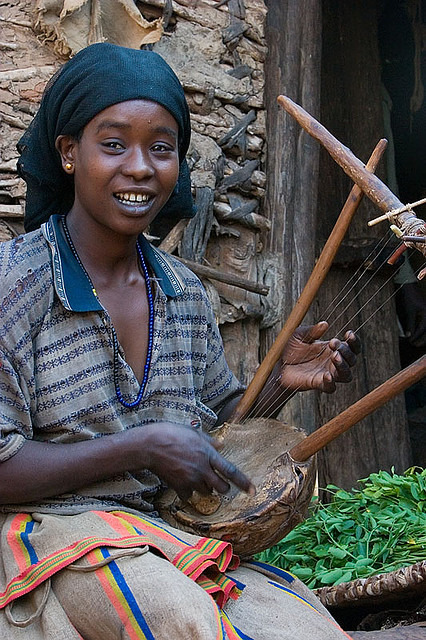 “But I don’t want to practice scales! They’re boring!” Have you heard this complaint from your students? Or perhaps you have said it yourself? When I was a young student I became enamored of playing them — really! I knew that scales are an important building block in music as they, with rhythm, harmony and melody, form the basis of music making. Part or all of a musical work traditionally is built around the scale. Once you can nail the scales, repertory becomes easier — sight-reading too. My warm up used to consist of playing them all, one after the other — sometimes slowly, sometimes quicker, often in different bowings and in rhythms. This took at least two hours. One day a friend overheard me and she said, “You must be crazy!”

The scale used or key of a piece is represented on the music staff by an icon called the key signature. Western music uses primarily major or minor scales, which are seven notes. If you play all the white keys on the piano starting with C you can hear what a major scale sounds like. But if you were to play only the black keys on the piano, you would hear a different scale — the pentatonic scale — a scale or mode that uses only five notes per octave. If you start on D# on the piano you would have a pentatonic minor scale. If you would begin on F# you would have a pentatonic major scale. These are two of the more common pentatonic scales. (See illustration)

Many composers have used the pentatonic scale especially in folk traditions — from Celtic music to gospel music to ancient Greek music and from Afro-Caribbean traditions to Chinese music and jazz traditions. The Javanese Gamelan and the Ethiopian Krar — a five or six-stringed Bowl-shaped lyre from Eritrea and Ethiopia — are tuned in the pentatonic scale.
Impressionistic composers such as Debussy, used the scale liberally as did Chopin famously in his Étude in G flat major Opus 10 No. 5 the Black Keys Étude and Ravel used it in Ma Mère L’Oye (Mother Goose Suite.) Perhaps the scale sounded a little exotic to them!

The Hungarian people are very proud of their historic folk music. Composers Zoltán Kodály and Béla Bartók traveled to the remote villages of Hungary to catalog, research and write down the folk music of the Hungarians, which had been preserved solely as an oral tradition. They found that Hungarian “peasant music” often does not use a regular meter and uses the pentatonic scale with a strong rhythmic steadiness or tempo giusto! These features differentiate “Hungarian peasant music” from that of any other nations.

Bartók studied over 300 melodies. The more modern tunes used for dancing, featured pentatonic turns with frequent leaps of the interval, or distance between two notes, of a fourth (or four notes). Hungarian gypsy music is quite distinctive as well. It has an exotic romantic flavor. The gypsy music uses the so called Hungarian minor scale and although this scale does use seven notes, the spaces between the notes are unique as are the instruments used including the Cimbalom — a type of hammered dulcimer composed of a large, trapezoidal box with metal strings stretched across its top. Two long sticks with a spoon shaped ends hammer the strings — quite wonderful!

pentatonic scales on the piano

The Zoltán Kodály-based method, originally developed in Hungary but now used worldwide, is designed to develop musical skills and to teach musical concepts to very young children through singing. Kodály used the pentatonic scale because of its simplicity, and it plays a significant role in this method.

“Teach music and singing at school in such a way that it is not a torture but a joy for the pupil; instill a thirst for finer music in him, a thirst which will last for a lifetime.”

Kodály advocated continuously and believed strongly that a person cannot be complete without music. Music, he said, serves to develop a person on all levels – emotionally, spiritually and intellectually. Kodály also believed that all people, everyone, has musical aptitude and that music education should begin as early as possible in a person’s life — at home and then later at school. Every child can learn music and has a right to an education in music.

Kodály believed that musical instruction should reflect the way that children learn naturally. Through singing games, fun and play, the child discovers the musical elements and has the opportunity to enter the world of music. The voice of course, is the most accessible of all instruments and can lead to a well-tuned ear. Singing is a great start to learn music, especially via the folk music traditions of each country and the easiest entry is the pentatonic scale! Scales don’t have to be boring. Many cultures have used the pentatonic scale in their indigenous music. That’s how we Hungarians became related to the Chinese. We are all related through our music.

Bobby McFerrin Demonstrates the Power of the Pentatonic Scale