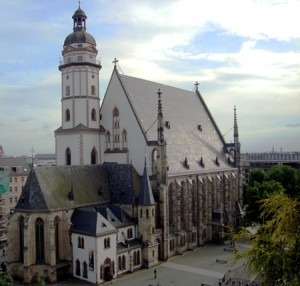 J. S. Bach: St. Matthew Passion, “Kommt ihr Töchter helft mir klagen”
One of the most wonderful experiences while traveling in Europe is the ability to visit monuments, castles, churches and civic buildings, and the spaces within the urban or rural landscape they occupy. Many have existed in one form or another for centuries, and you can’t help but wonder if these buildings and structure have memories, somewhere locked-away within their thick walls, arching columns or impossibly high spires? What for example, would the Thomaskirche (St. Thomas Church) in Leipzig tell us? Maybe, that on 25 May 1539, Martin Luther gave a blistering sermon that introduced the Reformation to Leipzig, or that Johann Sebastian Bach started his tenure as cantor of St. Thomas on 4 May 1723. Wolfgang Amadeus Mozart played the organ there on 12 May 1789, and Napoleon first used the church as an ammunition depot in 1806, and later as a military hospital in 1813. Richard Wagner was baptized on 16 August 1813, and Felix Mendelssohn resurrected the St. Matthew Passion on 4 April 1841. 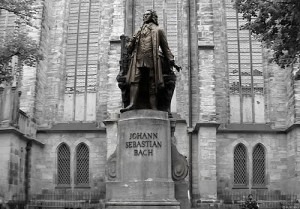 It might also tell us that the bell tower was severely damaged by fire-bombs dropped by Allied forces on 4 December 1943, and that decades of environmental pollutants in the 20th century severely damaged the exterior stonework and statuary, and even tarnished the interior Gothic paintings. Throughout these memorable events you would also have heard the voices and footsteps of boys aged between 10 and 18, because the church was physically — at least up until 1904 — connected to a school. The church was established in 1212, with the troubadour Heinrich von Morungen presenting a relic of St. Thomas as he entered the monastic order. The Thomasschule (Schola Thomana Lipsiensis, St. Thomas School), in turn, was founded by Margrave Dietrich von Meißen, and ran as an educational institution benefitting the poor. The founders quickly understood that when dealing with a large group of boys and adolescent men it is imperative to channel their boundless energies. As such they simultaneously founded a boy’s choir (Thomanerchor), headed by the musical director of the church, also known as the Thomaskantor. This venerable position is still appointed by the city council of Leipzig, which also prescribes performing and teaching duties. 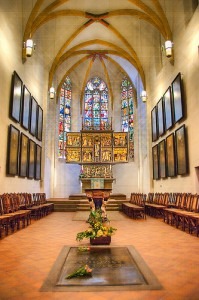 The first documented Thomaskantor Georg Rhau, who was also one of the most significant German music printers, took the reigns in 1518, and was succeeded by various composers and musicians, among them Johannes Galliculus, Johannes Herrmann, Johann Hermann Schein and Johann Kuhnau. It may be hard to believe, but J. S. Bach had a rather difficult time securing the position as Thomaskantor. Initially, the city council offered the position to Georg Friedrich Telemann, who withdrew his nomination after securing a salary increase in Hamburg. Next in line was Christoph Graupner, who composed a Magnificat as his audition piece. Written in the style of his teacher Johann Kuhnau, the composition secured him the position. However, the Landgrave Ernst Ludwig of Hesse-Darmstadt refused to release Graupner from his services, and what’s more, substantially increased his salary. Given such favorable terms, Graupner preferred to stay in Darmstadt, and poor old J. S. Bach was finally given the position. In his letter turning down the Leipzig position, Graupner wrote, “Bach is a man who will honestly and properly perform the functions entrusted to him.” And so he did! 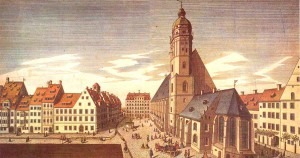 For nearly twenty-seven years, he was responsible for the education of several hundred boys in the St. Thomas School, teaching Latin to his young charges. He also was in charge of music at the town’s four churches: St. Nicolas, St. Thomas, St. Matthew and St. Peter. On average he had 55 boys in the Thomas school choir, who alternated singing at the two main churches, one cantata every two weeks. On 11 April 1727, the church of St. Thomas listened to the first performance of the St. Matthew Passion by J. S. Bach. Every since, this composition as well as the building that spawned it has stood as a monument to the spirit of humanity. Although scholars continue to squabble about “authentic performance practice” — we remember that Mendelssohn revived the composition with a chorus of almost 160 members — the work is intrinsically connected to St. Thomas. So is J. S. Bach, who after all, is buried in the church.