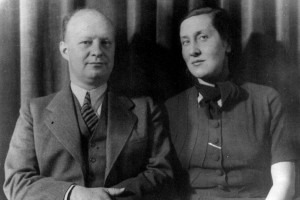 If you have ever taken wedding vows, you might still remember uttering the words “for better or for worse.” For Gertrud and Paul Hindemith, the “worse” was slightly more threatening than merely worrying about the next payment for the car. Just when the couple had comfortably settled into an incredibly busy and hectic routine in the glittering city of Berlin, things got complicated. On one hand, Paul was designated as a “standard-bearer of decay,” on the other he was lauded as the “flag-carrier of the future” in the field of music. Initially, Paul seemed rather unimpressed, and in 1934 he was even elected to the Leadership Council of the Reichsmusikkammer (State Music Bureau). However, a belligerent press mercilessly attacked his music and the fact that his wife was a “half-Jewess,” and the Reich Minister of Propaganda, Joseph Goebbels, agreed. For a while it was unclear whether Paul’s music would be officially banned, and no concert organizer or publisher would touch his music. A general ban on performances of his works was eventually decreed in October 1936, and Paul was busy looking for performing possibilities abroad.

Just a couple of months earlier, the Elizabeth Sprague Coolidge Festival in Washington had extended an invitation, and Paul set off to America in March 1937, leaving his wife in Berlin. During the six-week tour he played a total of ten concerts that won him great recognition as a performer and composer. Meanwhile in Germany, the Reichskulturkammer (State Cultural Bureau) staged an exhibition entitled “Degenerate Music” to document the “Jewish-Bolshevist attack on German art.” It denounced Gustav Mahler, Franz Schreker, Arnold Schönberg, Anton Webern, Ernst Krenek and Kurt Weill. Paul Hindemith was the undisputed star of the exhibition, with an entire section devoted to the “theoretician of atonality” and “closely related to Jews.” By that time it was clear that Hindemith had no professional future in Germany, and his wife reports, “Paul has somehow finished with the whole matter. You know, after all, that Paul has never acted hastily in blind passion, but that all decisions mature within him slowly but surely.” Finally, in the summer of 1938 the Hindemiths left Berlin and Germany behind, and settled in Bluche, located in the Swiss canton of Wallis. In 1939, Paul left for another extended solo journey to the US, probing the possibility of finding employment at the film studios in Hollywood. Thoroughly disappointed, disillusioned and lonely he wrote to his wife, “I think I am quite cured of the idea of doing something here in the area of film, based on the completely crazy idea of creating something of artistic value. One cannot do anything of that kind in earnest.” Hindemith was generally unimpressed with the American way of living, frequently referring to the country as the land of “limited impossibilities.” His impressions of New York are summarized in a letter to his wife, “In the afternoon I went for a walk amongst the stone buildings. It may be impressive, but it is certainly not beautiful. An enormous amount of traffic of course, and everything that impresses the little man. One great shop on Fifth Avenue after another. The Good Lord has the lowest houses; his churches are rather sheepishly squeezed between the more important buildings.” 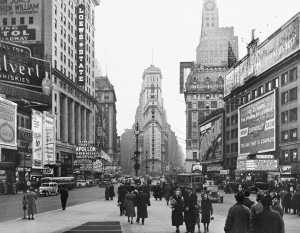 During bouts of loneliness, depression and dreadfully missing his wife, he writes, “If you feel like I do after your arrival in this blessed country, we shall make a delightful duo. I’m afraid I shall never really get accustomed to things here. If the monetary transactions run smoothly and the course of time does not travel in ever more idiotic orbits, one can really only be here temporarily if one does not want to be driven to desperation or to drink — but not even that tastes good here!” Hindemith had a similarly low opinion of his American students. He reported from the Berkshire Music Festival at Tanglewood, for which the most talented and gifted young American composers had been selected, “Here I am of course a very ‘famous’ teacher, and the pupils have already spread rumors of the many unexpected things I make them do. The company is unfortunately not outstanding, except for a small and very good emigrant boy from Germany. During the first lessons there was some resistance, partly because of the unaccustomed work I was demanding, partly in consequence of the absolute lack of attention I paid to the existing scores of my patients. With suitable treatment, however, even the most obstinate began to soften, and yesterday, after I had ground them down by the well-tried method of a three-hour exercise in strict counterpoint on the blackboard, they are all now extraordinarily well behaved, modest, and grateful.” At the beginning of 1940, Gertrude was still stuck in Switzerland and desperately looking for a way to join her husband, who had secured lectureships at the University of Buffalo, Cornell University, Wells College and eventually Yale University. Read more about her harrowing journey and the eventual reunification with her husband in our next episode.