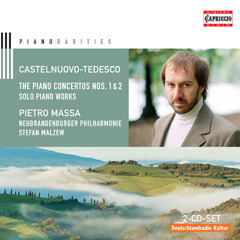 Mario Castelnuovo-Tedesco (Florence 1895 – Beverly Hills 1968) was a composer and humanist. His life was characterized by a lasting tendency to discover himself as a component of ancient cultural traditions, first the Tuscan and then the Jewish one. On the other hand, he showed an inclination to withdraw from the historical present, on the one hand, due to his reserved disposition and, on the other, because of the tragic events that rocked his existence.