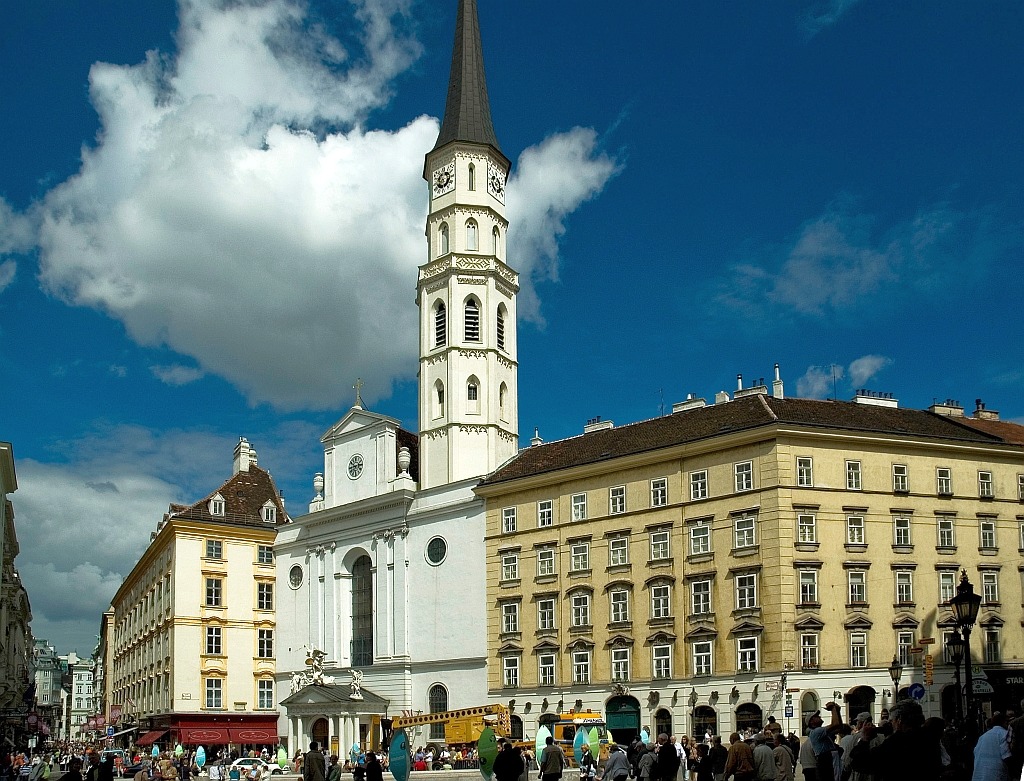 During the summer months of July and August, the city center of Vienna turns into a veritable assemblage of the United Nations. People from all corners and regions of the world visit the self-proclaimed “City of Music” to experience its unique flair, sample the local cuisine, attend concerts at the opera and elsewhere, and to take pictures of imperial and historic buildings. Invariably, everybody visits the Cathedral of St. Stephan, which towers over the old city center and remains the seat of the Archbishop of Vienna. At some point, I will tell you about music at St. Stephan’s, but for me personally, the most impressive church in Vienna — from a musical perspective — remains St. Michael’s, which is only a stone’s throw away. Located across from the Imperial Hofburg Palace, the church of St. Michael was essentially built on the site of the Roman camp at Vindobona. Erected in Romanesque architectural style, the church dates from the middle of the 13th century. Even today, the central nave and two aisles conserve this ancient structure, while the side chapels were added at a later time. Much of the gothic interior was removed and refitted in Baroque style in the 17th century, and the high altar — designed by Jean-Baptiste d’Avrange — dates from 1782. Johann David Sieber, an instrument builder from Brno, designed the pipe organ in 1714. With three manuals and 40 stops it remains the largest Baroque organ in Vienna. 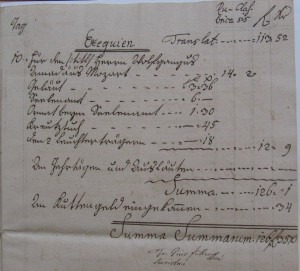 Introit: Requiem aeternam (Chorus)
Talking about music, we do know that a very young Joseph Haydn played the instrument in 1749. The most memorable musical event, however, took place on 10 December 1791. On that day, the parish of St. Michael said goodbye to Wolfgang Amadeus Mozart with festive funerary honors and a partial performance of the composer’s Requiem. Emanuel Schikaneder, who provided the libretto and also took the role of “Papageno” in the September 1791 premiere of The Magic Flute, paid 12 Gulden 9 Kreuzer for Mozart’s funeral mass. A number of major European newspapers quickly reported on the musical performance of Mozart’s Requiem. At the time of his death, as we all know, Mozart had only partially completed the composition. In fact, only the opening “Requiem aeternam” had been composed and fully orchestrated. The vocal parts and the basso continue of the “Kyrie” Fugue had been drafted, and were completed prior to 10 December — exclusive of trumpets and timpani — by the Mozart student Franz Jacob Freystädtler. Mozart had also drafted the “Dies Irae” sequence and the “Offertory,” but Freystädler probably did not finish the orchestration for these two sections. As such, they were probably performed with simple organ accompaniment at Mozart’s own funeral mass. The “Lacrymosa,” “Sanctus,” “Benedictus” and “Agnus Dei” — this time including trumpets and timpani — were newly composed by Franz Xaver Süßmayr at a later date. He also placed the “Kyrie” Fugue with the text “cum sanctis tuis,” at the end of the composition. Süßmayr had been Mozart’s last student, and supposedly had followed the composer’s instructions for completing the piece. Be that as it may, we do know that the performing musicians at Mozart’s funeral mass volunteered their services to honor the dead master. If you manage to visit St. Michael’s in Vienna, make sure you also drop by the large crypt located underneath the church. There you will find hundreds of mummified corpses including Pietro Metastasio, the most famous librettist of his day and Mozart’s collaborator in various operatic works.