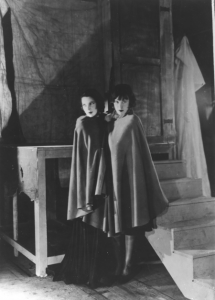 Tilly Losch and Lotte Lenya as Anna II and Anna I in The Seven Deadly Sins in 1933.

In 1932, Kurt Weill was commissioned to write a ballet. But, this was a ballet with a difference. Commissioned by the Englishman Edward James for his ballerina wife, Tilly Losch, James specified that Lotte Lenya would sing it and his wife, who looked not unalike Lenya, would dance it. A co-commissioner was Boris Kochno, a Russian poet, dancer, and librettist. Kochno, along with Serge Lifar, had inherited what remained of Diaghilev’s Ballets Russes but was unable to keep the company together.

With the commission in hand, Weill contacted Bertold Brecht, who had fled Nationalist Socialist Germany for Switzerland, and Brecht joined him in Paris to put together the libretto. 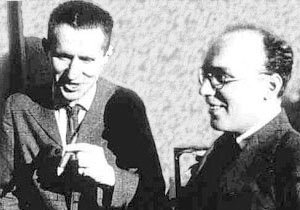 The dual nature of the leading lady – one a singer, one a dancer – meant the creation of the split character Anna I (Singer) and Anna II (Dancer). Anna I is the practical and cynical impresario for Anna II, the emotional and impulsive beauty. Anna describes their split personality as ‘She’s just a little mad, my head is on straight,’ but there’s more than one place in the libretto where the two Annas are really just two aspects of a single Anna. The Annas travel the cities of America from their home in Louisiana to seek their fortune, but finding each city a source of yet another of the deadly sins.

Through the work, the Annas want to fight the sins they encounter, but the Family (performed by a male quartet) insist that they must sacrifice all for the greater good. Once they have completed their 7-year trip, the Annas will have made enough money to build a little house for themselves and the Family. 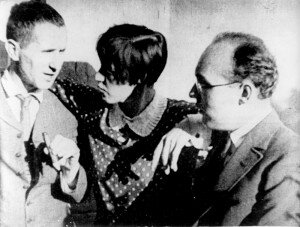 As the foil for the ‘good’ Anna I, Anna II often finds herself in the position of being scolded when she does try to be good. In Memphis, for example, the Family declares that Anna II is too proud (of her art) to perform at a cabaret and she should give in to her customers’ low desires.

No. 2. Pride
In Philadelphia, when Anna II tries to enjoy food, the Family reminds her that, as a dancer, she must keep on a strict diet.

No. 4. Gluttony
In San Francisco, Anna shows her envy when she wants to be more like those who are able to be lazy, who are too proud to be bought, who are free to express their anger at injustice, but it is her practical side who reminds herself of the rewards of her self-sacrifice.

No. 7. Envy
The seven-year journey of the sisters shows the gradual sacrifice of all that the Annas want or would like to be to make the Family have a comfortable home. There’s an inherent tragedy here – Anna, born free, gradually becomes enslaved to her Family’s desires and the sins she encounters through her journey can only reduce her. The sins, in the end, are truly deadly to the character that was the Annas.

Epilogue
The work received its premiere in Paris, by the Les Ballets 1933 company, founded by Boris Kochno and George Balanchine. This first production had choreography by George Balanchine and Maurice Abravanel as conductor. A second performance in Copenhagen in 1936 was immediately withdrawn because of the anger of the German Ambassador to Denmark. The work languished until the 1950s, when it was revived for a production by the New York City Ballet. Balanchine’s choreography was used and Lotte Lenya sang as Anna I, but the work was written at a lower pitch to match her older voice, and was sung in English. Since the 1990s, there have been a number of international productions for everyone sees in this little ballet much of the modern world.