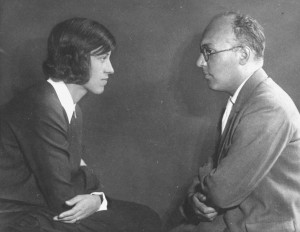 It’s exceedingly rare, but autograph musical scores by some of the great composers in the Western classical tradition are still being discovered! In 1999, a miniature Beethoven string quartet was rather accidentally found in a chest of papers in Cornwall. It had originally been given to the English travel writer Richard Ford in November 1817, and subsequently disappeared for well over a century. A Mozart “Credo” resurfaced after 200 years, and an autograph score of the 2nd Symphony by Rachmaninoff was discovered in 2004. And then there is the Bach “Wedding Cantata,” BWV 216, which had gone missing for 80 years. Unexpectedly, it showed up in a Tokyo suburb in 2004. 2017 is turning out to be a very good year for manuscript discoveries! Two original scores from English composer Gustav Holst have been found in New Zealand, more than a hundred years after they were first written. And in the latest round of sensational discoveries, the Kurt Weill scholar and managing editor of the critical Weill edition, Elmar Juchem, unearthed a previously unknown Weill song in a Berlin library.

The Lied vom weissen Käse (Song of the White Cheese) was mysteriously hiding in the Nachlaß of obscure actress Gerda Schaefer at the Free University of Berlin. Weill’s wife Lotte Lenya had mentioned the song, but attempts to locate it in the 1960s came up empty. Scholar had assumed that it referred to a German translation of an American play, but Juchem now found that it lampoons a charismatic evangelist who used prayer and cottage cheese for medical treatment. According to Juchem, “Joseph Weissenberg formed a real sect, and he was a constant feature in the Berlin tabloids at the same time that Kurt Weill was reaching the height of his fame as a young composer.” Written during the politically charged times of the early 1930s, it tells the story of a blind girl who is unsuccessfully treated by the faith healer. Weill fled Germany in 1933 and a substantial number of letters and manuscripts were destroyed. As such, “Weill discoveries like this are extremely rare.” Thank goodness that we still have dedicated experts and scholars who are not only capable of unearthing such artistic and cultural treasures, but also have the professional tools to recognize and process what they find!