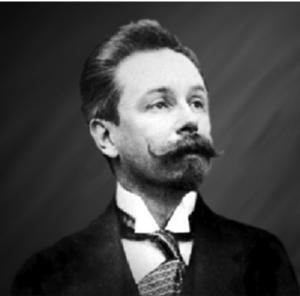 Alexander Scriabin (1872-1915) believed that art was separated from reality and existed as a pure form. Having deep faith in theosophy and perceiving himself as the Divine in the world, he was also influenced by Friedrich Nietzsche’s concept of Übermensch (Superhuman). He once said, “I am God! I am nothing, I’m play, I am freedom, I am life. I am the boundary, I am the peak.” Moreover, he thought that art had the ability to change the world, “enhance” humanity and bring human beings to ecstasy, therefore treating art as something intellectually higher, more extraordinary than rationality.

Prometheus starts with the mystic chord invented by Scriabin, which he called “the chord of the pleroma (referring to divine powers)”. A tense and mysterious atmosphere is created. The “contemplatif” section has long sustained notes played by flutes, reflecting that when one contemplates the unity of the whole, one can be much detached from the sense of time and space. The introduction of piano symbolises the chaos in the disordered world, particularly due to the use of highly dissonant and complex chords in the piano part. 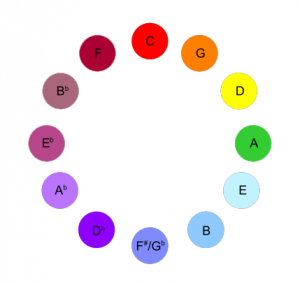 As the music goes on to “Joyeux” section, it reflects a component in ecstasy, joy. The joy is due to the liberation of oneself from the physical body and one should liberate oneself from the physical body before being able to have ecstasy. This process is completely mystical, as it eliminates rationality and logic. The indication “délicat, cristallin” (delicate, crystalline) represents the crystal-like purity in ecstasy, as humans are no longer in the physical world and are free from the chaos in the reality. The indication “voluptueux” (giving pleasure to the senses) reflects that there will be a certain spiritual level that we will fuse with the world, the Divine, and the objects.

There are constant struggles and contrasts between reality and ecstasy in the beginning. The indication “presque avec douleur” (almost with pain) represents the pain that humans suffer in the physical world as our desires are not satisfied. 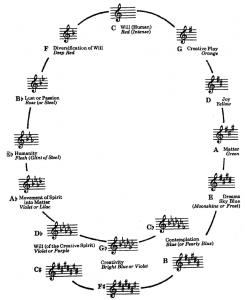 The indication “avec un intence désir” (a very intense desire) gives us a hint that desires can be fulfilled in ecstasy and give human beings euphoria, where for Scriabin it may be more related to sexuality. The use of trills and tremolo depicts the trembling excitement brought by the experience. There have been many attempts to achieve a climax, but all of them fail. It symbolises that human beings are created, but there is still no illumination, so the climax (i.e. highest level of ecstasy) is still not yet reached.

A misty, mysterious atmosphere is created again. The colour projected changes from mainly blue to red, which hints that the appearance of fire. Suddenly, the music is filled with sweetness and joy, as ecstasy can bring luscious moments to human beings. The indications “avec défi, belliqueux” (with defiance, aggressive) and “avec un splendide éclat” (with a magnificent splendour) are probably the preparatory steps to the highest level of ecstasy. To be fully immersed in the world of ecstasy, we must forget all the things in the physical world and be defiant. At this point, the colour of the stage changes from red to golden yellow, portraying extreme delight and joy.

Here comes the entry of the chorus. The singing further enhances the mystery and majesty of the music. Meanwhile, it turns the performance more into a religious event, praising Prometheus for his good deeds. The piece ends with a radiant, powerful, luminous F-sharp major triad, which implies that full ecstasy can finally be achieved because of the existence of illumination.

Scriabin’s use of colour organ (clavier à lumières) is also worth discussion, which is related to his well-known synaesthesia. Moreover, it is believed that this arrangement of notes and colours is based on his theosophical views, which is a circle of fifths. Prometheus started with F# and A on the colour organ (or Luce in the score), which F# stands for creativity and A for matter. Thus, bright blue and green colours are projected.

C (human) and F# (creativity) notes are at opposite positions in the diagram. The intermingling of different colours symbolises different elements in ecstasy. The sudden blaze of golden yellow represents to the joy of liberation. There are constant contrasts between the red and blue colours in the piece, which symbolises the struggle between human and creativity. The appearance of violet colour into the golden yellow stage represents the introduction of will of the creative spirit into the joy and sweetness. The piece ends with a bright blue colour, connotating a final, maximum level of ecstasy and then all the lights are turned off. There is a silent black, meaning that the journey of religious ecstasy ends in a sudden, leading to a sense of loss.

This piece has a strong reference to symbolism, trying to combine mysticism and ecstasy and link the realistic with the supernatural. Prometheus has given us insights into Scriabin’s belief of mystical experience, which includes humans’ “oneness” with the cosmos and Divine and the liberation of humans from the “physical” time and space. Besides giving a joyous exaltation, ecstasy provides humans with a hidden ladder, leading from our ordinary life to the Divine level, allowing humans to experience transcendental feelings. There will be no longer a boundary between oneself and the world, but instead a sense of eternity and spiritual oneness.

Scriabin once said, “I am a moment illuminating eternity… I am affirmation… I am ecstasy.”