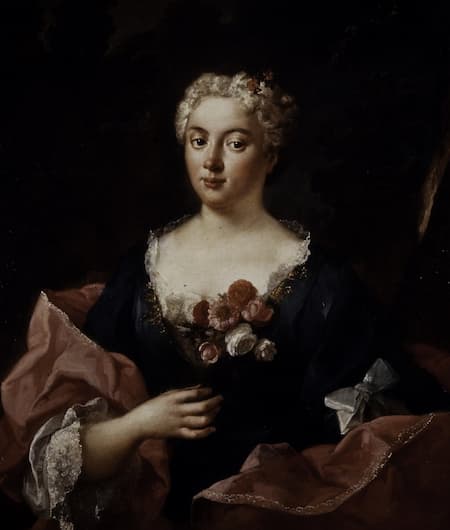 The Italian mezzo-soprano Faustina Bordoni (1697-1781) started her career in opera in Venice in 1716. She created dozens of roles as she moved around Italy: Milan, Modena, Bologna, Naples before moving north and creating a sensation in Munich and Vienna. She was considered one of the leading singers of her day.

In 1726, she was brought to London by the impresario Owen Swiny where she appeared in Handel’s Alessandro against her rival Cuzzoni. Their rivalry resulted in an exchange of blows onstage during a performance of Astianatte in 1727, but they both kept their positions despite the ensuing scandal. 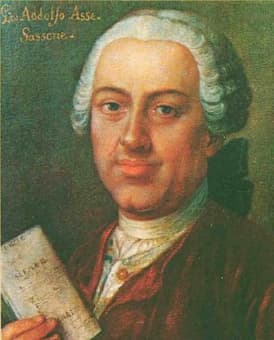 In 1730, she married the composer Johann Adolf Hasse and in 1731, both were summoned to the Saxon court at Dresden, center for the best music making in Germany. There, over the next 15 years, she sang in at least 15 of his operas, and also made trips to Venice where she sang in more than 30 operas before retiring in 1751. Her two daughters with Hasse were both trained as singers.

Around 1743, the Meissen porcelain factory produced a small scene which is known as Faustina Bordoni and Fox, showing the seated mezzo soprano in full spate. At the keyboard behind her, the music on the keyboard is for Hasse’s opera Antigono. At the keyboard sits a fox. 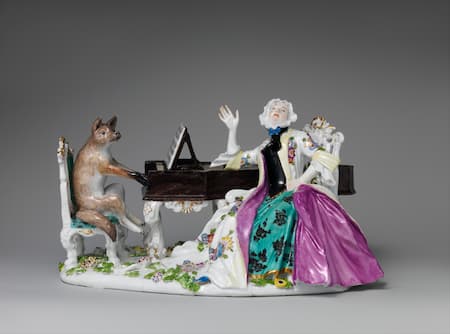 A look at the music closely shows us first that it is extraordinarily well written for ceramic work – the designer wanted to ensure that everyone was aware of the piece of music – the title says Antigono and it has Hasse’s name on it and the singer’s name on the top. Hasse was the very first to set one of the most popular of Metastasio’s texts. The aria comes from Act III of the opera, ‘Benché giusto a vendicarmi,’ is sung by the character Alessandro. Faustina sang the role of Berenice. 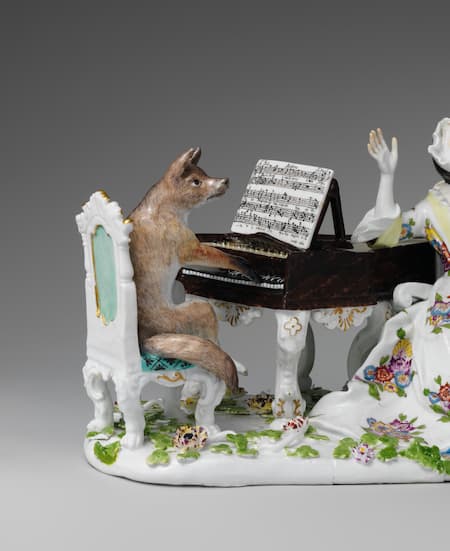 The aria is not one for Bordoni to sing but was for a role taken by Giovanni Bindi (aka Porporino), a castrato soprano singer at Dresden at the time. The lyrics are for an aria about seduction, dignity, and revenge.

And then there’s the fox.

It is said that the fox alludes to a love affair Faustina Bordoni was having at the time with a certain Herr Fuchs, or Mr. Fox.

Or is this true? One scholar points out that the most famous Herr Fuchs at the time was the composer Johann Joseph Fux, court composer at Vienna. But he had died in 1741 and this piece dates to late 1743–early 1744. Could it be a reference to her husband, Hasse? Hasse’s name could be read as ‘Hase’ or ‘Haass’ and could be made into the animal the hare. Hares and foxes are all over the mythological literature – in one German saying, ‘man kann nicht Hase und Fuchs zugleich sein’ (one cannot be a hare and a fox at the same time) and, in the opposite sense, ‘Du must fuchs vnnd hase sein, weiss vnd schwartz können’ (One must be able to be a fox and a hare, to do [things] black and white). If Hasse was able to be both fox and hare at the same time, perhaps that explains his long-term success at court. Hasse certainly had a unique position at the court: with one exception, when this porcelain was made, Hass only directed performance of his own operas, and the only prima donna who appeared in them was his wife.

The link of the image with the reputation of a prima donna is tenuous at best. The designer, Johann Joachim Kändler (1706-1775), kept periodic work reports and in his own notes, this work is recorded as a fox at a clavicembalo with a lady sitting on a chair listening. How did Faustina Bordini get her name attached to this? There are at least 3 extant copies of this work – the one in New York as shown above, one at the Residenz-Museum in Munich, and a third in Gotha, as part of the Pauls-Eisenbeiss Foundation, where there’s no music stand, and the description is The fox at the harpsichord. One example that came up for auction in 2017 looks like this: 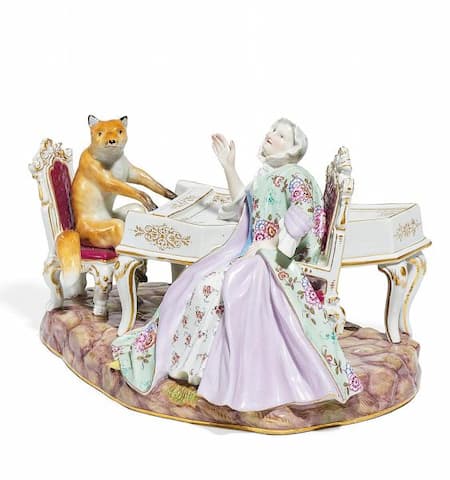 It’s only the New York copy that has music on the music stand on the keyboard connecting it with Hasse and then to Faustina. The New York copy also has the woman’s teeth visible, and that, combined with the music, supports the idea that she’s a singer. It was an article in 1952 that put Faustina Bordoni’s name on the piece and the identification of the Fox as a Herr Fuchs/Fux came as early as 1912, in other words, 166 and 210 years after the work was created.

So you need to make your own mind up: is this a scandalous hidden reference to a love affair or is this a hidden reference to the kind of power that Hasse held at court? In either case, the designer, Kändler, shows his familiarity with opera and the Dresden scene, and, more importantly, with society.