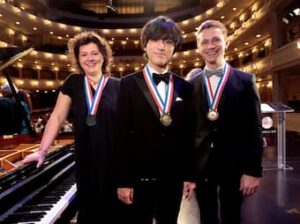 One of the most prestigious piano competitions worldwide, the Van Cliburn International Piano Competition 2022 has finally come to an end after an enduring 17 days, in which competitors had to go through 4 rounds and prepare solo recitals of 140 minutes in total, in addition to 3 concertos and a new, commissioned work (“Fanfare Toccata”) by Stephen Hough.

Lim has earned a lot of attention since his semi-final recital with the complete set of Liszt Transcendental Etudes, which was a remarkable feat without question. Most, if not all, technical challenges were comfortably tackled, and the virtuosity Lim exhibited was astounding.

His Mozart Concerto No. 22 and Beethoven Concerto No. 3 were solid with careful phrasing and judicious articulation, but rather ordinary and lacking in originality. Anyway, the performance that really brought the house down was his Rachmaninoff Concerto No. 3. Lim showed formidable pianism and great passion throughout, but there were places where more nuanced voicing and tonal control (e.g. 21:55, 24:22, 24:53) would have been appreciated. Taken at an exceedingly fast pace, the final movement was much fuelled by adrenaline, coupled with moments of overshooting both in terms of emotions and tempo. This weakened the build-up towards the climax and the overarching sense of entirety. It was overall a successfully fervid performance (as manifested by the rapturous applause), but more refinement was warranted.

A seasoned and self-assured musician, Geniushene demonstrated interpretive maturity throughout the competition, in the sense that she always had something personal and unique to say. Her Brahms Ballades Op.10 in the quarterfinal round illustrated her musicianship perfectly.

Her command over the instrument (not talking about mere precision or superficial virtuosity here) was also exceptional. For instance, her sensitive touch (e.g. Beethoven Bagatelles Op.33) and alluring tone colours (e.g. Verdi-Liszt Danza sacra e duetto finale d’Aida) were something that captivated me in her semi-final recital.

Geniushene’s Beethoven Concerto No. 1 was an illuminating combination of classicism, personal touch and technical mastery. Together with the sparkling cadenza, the performance possessed much poise and aplomb. The only complaint would be the overuse of una corda, which occasionally compromised the clarity. As for her Tchaikovsky Concerto No. 1, while the sometimes cautious approach and slips hampered the conviction in the first movement, she regained composure in the subsequent movements and eventually reached the triumphant conclusion.

Choni’s Prokofiev Concerto No. 3 was rather lacklustre and would benefit from more rhythmic rigour, acuity and characterisation of sections with contrasting moods. He also suffered from a significant memory lapse in the last movement. Nevertheless, his Beethoven Concerto No. 3 turned things around — the music came alive with his energy, diversity in articulation and, most importantly, a sense of engagement. 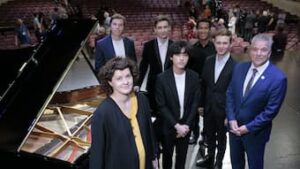 As in any other competition, some will be pleased with the results and some less so. (As one of the jury members, Stephen Hough mentioned only three pianists out of the six he chose were advanced into the finals.) My personal ranking was actually Geniushene > Lim > Choni considering all four rounds, for I value musical maturity and craftsmanship over technical brilliance. Don’t get me wrong – Lim is an absolutely gifted pianist with impeccable pianistic capabilities, but it will take time for him to transform from a virtuoso to a real musician. However, it is understandable why Lim was awarded the first prize, given his daring programming, technical wizardry and stage presence.

The end of the competition only marks the beginning of so many opportunities that will be opened up to these wonderful pianists. Meanwhile, these also represent tremendous challenges – from coping with numerous concert engagements to continuing to expand their repertoire while not burning out. Let’s look forward to their future artistic journey, and congratulations to all prize winners!