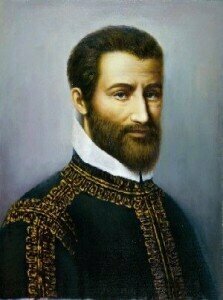 Giovanni Pierluigi da Palestrina (1525/26-1594) may have been born in the city of Palestrina, as indicated by his name, or may have been born in Rome, where his father may be the ‘Santo de Prenestino’ on the 1525 census. In any case, his entire life revolved around Rome, and his various church associations, Santa Maria Maggiore, San Giovanni Laterano, and finally Saint Peters, were in the highest echelons of the Catholic Church. 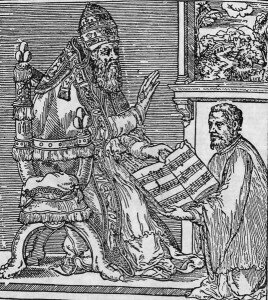 He appears as a choirboy at Santa Maria Maggiore in 1537, and by 1544, was an organist at the cathedral of S. Agapito in the town of Palestrina. He played the organ and trained the boys and men of the church.

In 1551, he was appointed master of the singers of the Cappella Giulia, which functioned as the second choir (after the Sistine Choir), and trained native singers for the first choir and other choirs around Italy. His appointment came through Pope Julius III, before whom Palestrina is shown kneeling, presenting his first book of masses of 1554. That Pope Julius III was the Bishop of Palestrina, is, ahem, of course, irrelevant. 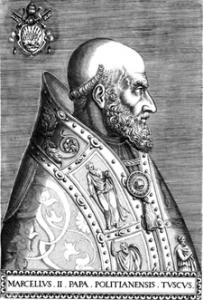 Palestrina: Missa Papae Marcelli: Gloria (Oxford Camerata; Jeremy Summerly, cond.)
On 31 January 1555, Palestrina was admitted to the Cappella Sistina, the official musical chapel of the Pope. The year 1555, unfortunately, turned out to be the year of 3 popes: Julius III died on 29 March 1555, having served for 5 years and 50 days; Marcellus II took the papal throne for a mere 22 days, serving from 9 April to 1 May; to be followed by Paul IV, who started on 23 May 1555 and served until 18 August 1559. 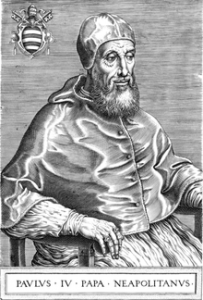 Palestrina: Missa Papae Marcelli: Credo (Oxford Camerata; Jeremy Summerly, cond.)
Palestrina’s Pope Marcellus Mass (Missa Pape Marcelli) was published in 1567 and it is thought that it was Palestrina’s response to a particular event in 1555. On Good Friday 1555, 3 days after starting his reign, Marcellus called all his singers together to request ‘that the music for Holy Week should be more in keeping with the character of the occasion and that as far as possible the words should be clearly understood.’

Meanwhile, in elsewhere Italy, the Council of Trent was underway. It started under the reign of Pope Paul III, on 13 December 1545, and concluded on 4 December 1563, under Pope Pius IV, having met in session 25 times over the nearly 18 years of the Council. At its conclusion, it issued guidelines that emphasized the removal of lascivious and impure secular elements from sacred music, as well as the need for the sacred texts to be intelligible to the attendees at mass. 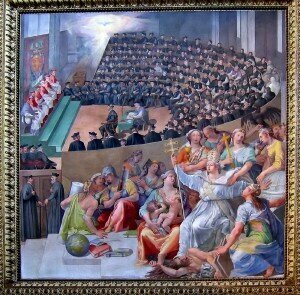 Palestrina: Missa Papae Marcelli: Sanctus (Oxford Camerata; Jeremy Summerly, cond.)
So now we have a mass inspired by the words of Pope Marcellus, which happens to meet the requirements of the new directions of the Council of Trent…and was probably written in 1562, so firmly up-to-date. Although we can’t be certain today, it may have been performed for some of the clergymen considering the problem of understanding sung words.

Palestrina: Missa Papae Marcelli: Agnus Dei (Oxford Camerata; Jeremy Summerly, cond.)
Palestrina created, in the Pope Marcellus Mass, the model for the new Catholic mass in the age of the Reformation. All of his skills in writing counterpoint, in setting the words clearly, and making use of all the compositional tools he had come into play: the close imitation in the Kyrie followed the homophony and voice pairing in the Christe section of the Kyrie; the syllabic treatment in the Gloria; the appearance of the cantus firmus in the Credo; and throughout, the contrasting groupings of voices from duets to quartets to all six voices.