‘Be open to those surprises’ 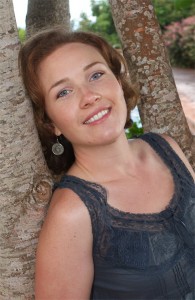 Having just starred in the world premiere of Nico Mulhy’s new opera Marnie at English National Opera, American soprano Sasha Cooke speaks to me on one of her rare days off.

Highly in demand as an interpreter of contemporary music, the process of getting Marnie to the stage was one of Sasha’s biggest challenges yet: ‘Aside from the vocal standpoint,’ Sasha says, ‘it’s a physical and mental long haul, to go through so many scenarios that Marnie’s thrown into. It’s a very intense but wonderful experience.’

The intensity of the Hitchcockian double-life that her character leads is a far cry from her days growing up in Texas, where she is now based raising her own family. One of Sasha’s earliest musical memories was hearing Samuel Ramey singing Mephistopheles in Gounod’s Faust during one of the many evenings her father, an opera aficionado, would spend accompanying his daughter to shows at the local opera house. Nowadays Sacha’s children dominate her Spotify playlist, Ella Fitzgerald and Nina Simone rubbing shoulders with the soundtrack from Frozen, all in amongst the pieces Sasha is learning for her upcoming engagements, including Berlioz’s L’Enfance du Christ. 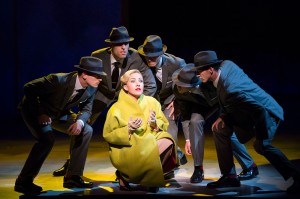 Because of her strong commitment to new music, much of Sasha’s time is spent learning brand new scores, for which there are no reference points, no previous recordings, to use as a guide. Far from seeing it as a disadvantage, Sasha thrives on the creation of new work. ‘To watch the creative process, it’s an incredible honour. And to have a say in it, too – to know my input is so valued, it’s really different.

‘So often in opera we’re remounting productions or stepping into something that someone else did. I think most opera singers want to create a role as if it’s new, so when they’re taking on something that’s been done for hundreds of years, they want to add something that is really their own. So I think we try to do that with everything, but with new music, the stakes are raised.

‘It’s a totally different process, and it’s wonderful. The feeling of that first night is really unlike anything else, when you know that these notes have not been heard by people ever. There’s an incredible energy there – you feel really lucky, really grateful.’

Gratitude is one of the main qualities Sasha tries to inspire in young singers, when teaching or giving masterclasses. ‘I always say it’s important to show gratitude, because we often don’t recall how much has gone into something. The marketing, preparation, press, stage crew, costumes – I’ve never felt as glamorous as in Marnie; she has thirteen gorgeous costumes – I’m a big believer that if you feel gratitude and show it, it will come back to you.

‘To me, it’s a reminder of the way we are as human beings. None of us exist on our own without the help of others – we can’t. The arts are a magnified version of that.’ 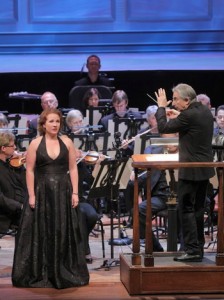 Along with gratitude, preparation is the other important factor in sustaining a successful career. ‘When you don’t prepare,’ Sasha states, ‘Not only do you not get asked back, but your performance suffers because of stress. It’s vital to learn your repertoire in a slow, organic way.’

Coming out of her studies, Sasha never imagined her career would involve so much contemporary music; her openness to new experiences helped this branch of her career to blossom.

‘A lot of young singers coming out of school have this idea of what they think the business will be like, what their career might be like, and then something will shift and they’ll be in a different situation. The key is to be open, not to have it all figured out.

‘When you’re trained there’s sort of a generic stamp we all get. We all follow the same mezzo soprano book of arias, mezzo this or that, so we kind of have an image of who we think we are, or idols who we aspire to, but then of course every path is unique.

‘It’s good to be open to those surprises; you can never be surprised by the way things happen.’